Get the app Get the app
AOPA Members DO more LEARN more SAVE more - Get MORE out of being a pilot - CLICK HERE
News & Media Baby steps: Long way to go on presidential TFRs 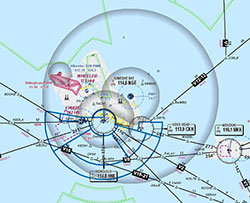 Pilots have been navigating around large presidential temporary flight restrictions (TFRs) for nearly a decade now. While the FAA and Secret Service have made changes to the TFRs to grant pilots more access to the airspace, the latest two-week TFR over Hawaii for the Obama family’s vacation proves there’s still a long way to go.

The 30-nautical-mile-radius TFR included a small cutout over Dillingham Airfield to allow flight training operations, but it shut down those operations at four other airports, forcing instructors and students who wanted to train during those two weeks to receive special permission to fly through the outer ring of the TFR to Dillingham.

“… we could have at least told someone that the Dillingham exemption was of little or no help to most of our GA operations,” Kiefer wrote to AOPA. “The size and extent of the restrictions caught us totally by surprise.”

AOPA continues to work with the FAA to try to mitigate the impact TFRs have on local operations. Last summer, the association and the FAA worked out gateway airports to allow operations to and from Martha’s Vineyard where the president’s family was vacationing for an extended period of time.

“Presidential TFRs involve many government agencies, but we appreciate that the FAA has worked diligently to try to preserve access to the airspace,” said Brittney Miculka, AOPA manager of security. “Our next step with the FAA will be to encourage the agency and Secret Service to solicit and incorporate feedback from pilots so that a more workable solution can be developed.”