Get the app Get the app
Already a member? Please login below for an enhanced experience. Not a member? Join today
News & Media 'General Aviation Appreciation Month' opens 2010 in W.Va. 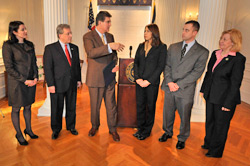 West Virginia is ringing in the new year with a salute to general aviation. Gov. Joe Manchin III, who is also a pilot and AOPA member, signed a proclamation dubbing January “General Aviation Appreciation Month.”

“Governor Manchin and the state of West Virginia are committed to aviation,” said Greg Pecoraro, AOPA vice president of airports and state advocacy, who attended the proclamation signing Jan. 7. “AOPA appreciates the support general aviation receives in the state. West Virginia’s efforts are a model for other states.”

The state is home to manufacturing and repair facilities for Aurora Flight Sciences, Bombardier Aerospace, Lockheed Martin, Pratt & Whitney, and Tiger Aircraft. Aerospace is one of the fastest-growing sectors of the state’s economy, according to the proclamation, adding nearly 600 new jobs between 2000 and 2005 and contributing 3,200 jobs either directly or indirectly related to the industry. GA also contributes $616 million to the state, which boasts 34 airports and 1,859 pilots.

“Given our state’s geography, a great many businesses and communities depend upon General Aviation aircraft and small aircraft of all types for access to medical treatment, mobility, economic opportunity, disaster relief, and a wide range of critical resources,” the proclamation noted.

Manchin is a strong GA advocate and led AOPA’s GA Serves America Rally in November 2009 at the association’s Aviation Summit in Tampa, Fla. Watch the rally on AOPA Live.