Get the app Get the app
AOPA will be closed July 4th, in observance of the Independence Day holiday. We will reopen at 8:30 am ET on Tuesday, July 5.
News & Media Politicians & Planes 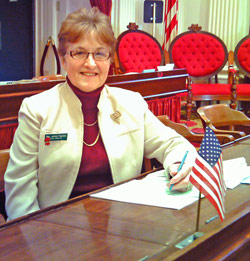 Vermont Rep. Janice Peaslee has sat on the House transportation committee for 21 years. She earned her pilot certificate in November.

For Vermont Rep. Janice Peaslee, a single piece of plastic symbolizes the culmination of nearly a decade of work: her private pilot certificate.

Peaslee earned her certificate in November 2009. She was the oldest student pilot the examiner had taken on a checkride, but she dismisses age as irrelevant—she won’t even mention the number. She practically runs up and down the stairs in the state house between committee hearings, floor votes, and other business. When the assembly is in session, she commutes 90 minutes each way to Montpelier from her home in Guildhall, near the New Hampshire border. She owns a farm that sells potatoes throughout the Northeast. And for the past year, she kept two instructors busy flying with her, sometimes three or four hours a day.

“I don’t recognize my age, and nobody else needs to either,” she said. She explained later, “Just because you’re in your seventies doesn’t mean you can’t get out and do things. Age is just a number.”

Peaslee began flying as a way to cope with grief after her husband died in 1999. She discovered a passion for it, and over the next nine years met the challenges of ground school, endured a 17-month hiatus for an engine overhaul, and practiced until she was sure she would far exceed the practical test standards. Now she pulls the certificate from her wallet and shows it to her colleagues in the state house, pointing out Wilbur and Orville Wright on the back.

“It’s the most gorgeous thing I could ever think of,” she says, beaming.

‘There’s nobody in that plane!’

Vermont Tax Commissioner Rich Westman, who served with Peaslee in the House for 21 years before taking his current post, said a colleague was at Newport State Airport in Orleans County a while back when he saw an airplane taking off with no one in the pilot’s seat.

“He said, ‘There’s nobody in that plane!’” Westman recounted. The representative then saw a puff of hair and realized—it must be Janice.

Peaslee’s pilot certificate lists her at 4 feet, 10 inches, but she said she hasn’t bothered to check her height herself. When you stand up and you’re not much taller than the people sitting down, you find other ways to assert yourself, she said. 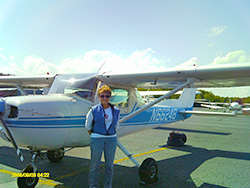 Over the past year, Peaslee has kept two instructors busy flying with her in her Cessna 150. “She would fly for hours if you let her,” said instructor Natalie Brunetto.

Of her 22 years in the legislature, Peaslee has spent 21 in the transportation committee. Peaslee’s tireless devotion to transportation issues has had tangible results. Peaslee called everyone she could think of for 15 years to reconnect Vermont and New Hampshire by rebuilding a bridge, and the states finally worked together to cross the Connecticut River with a new bridge. They named it the Janice Peaslee Bridge in honor of her efforts. And just this month, Peaslee reported a bill that will allow heavy trucks to use the state’s interstate highway system. It was the highlight of her month, she said.

She is a fierce defender of the transportation budget, and Westman, who was formerly the chair of the committee, said she understands the importance of small airports in a way that many lawmakers do not. “None of us dared to touch the aviation budget” with Peaslee defending it, he said. Peaslee is scrappy, he added.

Before 2000, Peaslee’s only experience in airplanes was taking commercial flights while traveling with her husband, Bert. It was an experience the two enjoyed sharing, whether they were on a trip to Cancun or doing business in Denver.

Bert introduced Janice to the world of Vermont politics by getting her involved in his own political positions. He taught her about agriculture at the family farm, Peaslee’s VT Potatoes. After many years together, his death in 1999 hit her hard.

Janice looked for a way to cope with the grief, and in 2000 she decided to look into learning to fly. It was an undertaking that would honor the activity she had enjoyed with her husband but be different from it. It would help her move forward and still cherish the memory of her husband.

At around that time, flight instructor Steve Kelly ran a story in the local newspaper about a ground school he was starting at the Caledonia airport, about 45 minutes from Peaslee’s home. Peaslee spoke with Kelly and others at the airport and went for her first general aviation flight in a Cessna 172. Peaslee could hardly see out of the cockpit.

She wasn’t sure if she would enjoy flying, so she was unprepared for the thrill she experienced sitting in the left seat for the first time. Remembering that first flight, she mimed advancing the throttle and described the feeling of liftoff. By the time the airplane touched down, she was hooked.

“You look forward to every flight, and when you get back the first thing you do is check the weather” for the next flight, she said. Flying after that was not just a hobby; it was a passion.

“There’s nothing in the last 10 years that’s delighted her any more than flying,” Westman said. “… A lot of us worried about her (after her husband died), but no worry any more.” 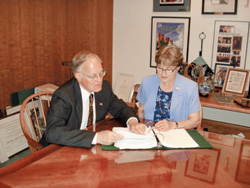 Peaslee with Vermont Gov. Jim Douglas. Peaslee is a fierce defender of the transportation budget and funding for small airports.

Peaslee came to aviation with experience as a mother and a politician; she had taken none of the college courses that would lay the foundation for learning principles of aerodynamics, weather, or geometry. Undaunted, she started ground school in 2001 and advanced chapter by chapter through the unfamiliar topics in the FAA handbooks.

She took the same approach to flying. She started training with Kelly with no concern about the hours she would log before she achieved a certificate. She didn’t just want to meet the standards; she wanted to exceed them. “Number of hours or length of time isn’t as important as meeting the challenge, sticking with it,” she said.

Kelly, Peaslee, and others formed a flying club to buy and train in a Cessna 150. Peaslee gradually bought others’ shares in the airplane until she owned it, and when Kelly began instructing in Nashua, N.H., two hours away, she took the airplane there to continue her training with him. When he moved away for a medical helicopter job, she continued training with other instructors: one for the weekends and another during the week.

Even if the weather was marginal, Peaslee drove the two hours to Nashua to see if she could fly. If the weather didn’t pan out, she simply drove back home. When she did get to fly, she relished every minute of it. Natalie Brunetto, who instructed Peaslee on weekends and evenings, said Peaslee would sometimes fly three or four hours a day and never seemed to tire. “She would fly for hours if you let her,” she said.

After she had become proficient in most of the tasks she would need on her practical test, Peaslee still struggled with consistently identifying landmarks for navigation. She would sometimes fail to see the whole picture or be too quick to think she was lost, her instructors said. They decided to wean her slowly from relying on instructors’ help with navigation.

“All of a sudden something just clicked,” said Trevor Smith, who instructed Peaslee on weekdays. She went out for a solo one day and had everything figured out. And when Smith accompanied her on a cross-country to Sanford, Maine, she flew a textbook flight. In two weeks, she had navigation down pat, Smith said. By the time she went for her checkride, Peaslee was almost overprepared. Smith was at the flight school when Peaslee returned from her checkride.

“I saw her come in with a big grin on her face and thought it must have gone well.”

With 150 representatives and 30 senators, the Vermont legislature is small enough to feel like an extended family. Their political views may vary, but legislators are there for one another in times of tragedy and triumph. “Politics gets out of the way then,” Peaslee said. Her fellow legislators comforted her when her husband died, and they have shared in her excitement over achieving her pilot certificate.

She’s offered rides to colleagues in the legislature, with one stipulation: She never flies without full fuel. That means her heavier colleagues may have an incentive to meet their New Year’s resolutions, or else wait until she flies a larger airplane. Until then, they can take a look at the documentation of Peaslee’s accomplishment, the certificate she keeps in her wallet, ready to share her passion with anyone who cares to hear.