Get the app Get the app
Already a member? Please login below for an enhanced experience. Not a member? Join today
News & Media GA groups share plans for 2010 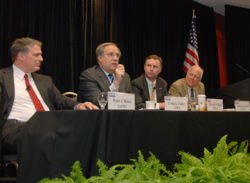 The general aviation industry entered 2010 with plenty of challenges: securing long-term funding for the FAA, fighting the prospect of user fees, facilitating air transportation modernization, recovering from a recession, and correcting public misconceptions about the value of GA. The heads of leading industry associations came together Jan. 26 to rise to the challenges with cooperation and a broad base of support.

National Air Transportation Association (NATA) President James Coyne led a discussion with the presidents of AOPA, the National Business Aviation Association (NBAA), and the General Aviation Manufacturers Association (GAMA) at the NATA FBO Leadership Conference in San Antonio, Texas. The associations have worked together more than ever before over the past year.

“We cannot forget what we did in 2009 when it comes to standing up for GA,” AOPA President Craig Fuller said. “… The fact is that by working together a lot has been accomplished, and we got more people to the table to discuss our issues.”

GA has found support in Congress recently, Fuller said, but the key to success in 2010 will be beyond Washington. There is still a lot of work to be done in Washington, but AOPA’s focus will be on efforts throughout the rest of the country. “This year, we will be holding events around the country telling our members that if they care about GA, they must get engaged,” he added.

Coyne, who is chair of the GA Serves America campaign advisory committee, said AOPA, GAMA, NBAA, and NATA members have to get more active in GA issues. “Authority is going back to the grassroots, and our memberships are more important than ever before,” he said. Like AOPA, NATA will have a special focus on state and local issues in 2010.

The challenges ahead require a coordinated response from GA associations, said NBAA President Ed Bolen. “It is critically important to communicate a positive, accurate, and fair message about business aviation,” Bolen said. He added that support from people outside the industry will be important to communicating that message to opinion leaders.

While associations work to defend the GA industry this year, companies will be working toward an economic recovery. GAMA President Pete Bunce said the industry is gearing up to meet the economic challenges of 2010. Goals for the coming year include accelerating NextGen air transportation system technology equipage through incentives to operators, he said.