Get the app Get the app
News & Media Turning Bulldog loose

With all of the excitement surrounding the April Fun to Fly Road and Runway Rally (see “ Ultimate Cross-Country/Road Trip,” June 2010 AOPA Pilot), the Remos left home without tiedowns or chocks. Like guardian angels, the good folks at The Claw popped over as the airplane was being positioned by the Big Yellow Tent at Sun ’n Fun. Jim Edwards presented us with our very own Claw tiedown kit, and helped to secure the airplane in the sandy ground, where it withstood Florida’s breezes very nicely. The kit includes three anchors, nine spikes, a hammer, and 30 feet of rope, and it all comes in a bag that weighs just eight pounds (so no excuses for leaving it behind). We’ll carry the kit to every other venue we visit, and later this year turn it over to the new owner of the Remos—whomever that may be.

One item we didn’t forget on our trip was our colorful PlaneSights pitot tube cover. The Remos’s pitot tube is right at eye level for Senior Editor Al Marsh, who never forgets to remind me to keep that pitot tube cover handy. And I do. The cover goes where the Remos goes, tucked neatly into a door pocket or behind the pilot’s seat until it’s needed. It’s one of those must-have items for an airplane that spends a lot of time on public view. 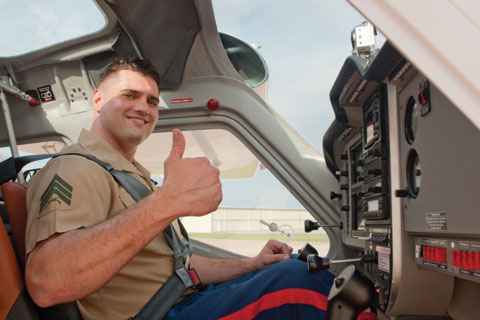 During the 15 hours we’d flown together in the AOPA 2010 Fun to Fly Sweepstakes Remos GX, his state of mind was always perfectly obvious—and it was almost invariably cocky and exuberant. On the few occasions he was frustrated or displeased, he made that clear, too.

The Marine from Texas is highly coachable, and there, too, directness works best. Words and phrases such as “perhaps,” or “you might consider,” are wasted on Blair (better known as “Bulldog”). You simply tell him, “Do it this way.” Then sit back and watch him try. If he messes up, he usually recognizes it right away. If not, you tell him, “That was terrible,” give him a brief description of what went wrong, and let him try again. He’s not easily discouraged, he’ll keep trying until he gets things right, and he seldom makes the same mistake twice.

We’d made several flights in the pattern at AOPA’s home base at Frederick, Maryland, with the winds kicking up above 20 knots. Blair handled the challenging conditions beautifully, but I figured it would take a few calm days for him to consistently make enough good approaches and landings before I could let him solo. We flew on Wednesday, March 24, and the conditions were characteristically windy. Afterward, we scheduled our next flight for several days hence.

Blair called the very next morning, however, and the winds were calm. 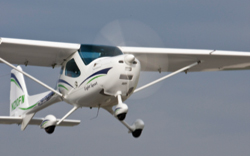 “I want to play hooky today and come out and fly,” he said. “What do you say? Will you do it?”

Soon he was on the way from his home near the Walter Reed Army Medical Center, and I planned a busy day for him. First, we’d fly while the winds were light. Then he’d take the FAA’s Washington airspace quiz online, and we’d review his presolo written test together. The forecast called for a breezy afternoon, so I anticipated another dual flight.

The morning flight in the pattern went beautifully, and Blair made a dozen unassisted takeoffs and landings. I kept my arms folded and my mouth shut for half of them. The classroom review went well, too, and that afternoon, the winds were still calm. We climbed back in the Remos and taxied to Frederick’s Runway 23. On the way, I asked Blair how he was feeling.

“Really good,” he said with a smile. “Can’t wait until I can start doing this by myself.”

That was just what I had expected and hoped to hear. I’d hidden a handheld radio inside my jacket and was ready to get out of the airplane and send Blair on his way.

“I agree with you completely,” I told him, unbuckling my seatbelt harness. “In fact, you’re going to solo now. I’m going to get out of the airplane right here, and I’m going to watch from the side of the runway. I’ll ask for a radio check, and I want to see up to three takeoffs and full-stop landings. No more than three. Taxi back each time and use the full length of the runway. If you see anything you don’t like, go around. Other than that, have a great time, and expect the airplane to climb a lot better without my 180 pounds of dead weight in it.”

Blair seemed genuinely surprised, but also excited and pleased by the sudden turn of events.

The handheld radio worked fine, and Blair smiled broadly as he taxied to the nearby hold-short line. His radio calls were crisp and succinct, and he lined up with the centerline and took off smoothly and without hesitation. The airplane seemed to climb very well, indeed. 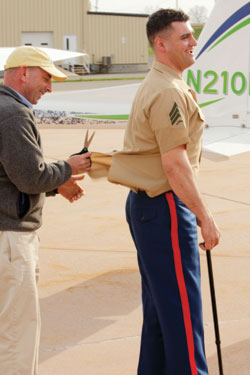 Blair, 35, a married father of a 4-year-old daughter, is a veteran of some of the most ferocious fighting in Iraq, and he was severely wounded there in 2006 by an explosion that nearly destroyed both his legs. He walks with a cane, has undergone scores of reconstructive surgeries, and he’s in nearly constant physical pain. Given his personal history, I couldn’t help but wonder if this first solo flight would rate highly in such an eventful life, or whether it would be an important personal milestone at all.

He turned crosswind, downwind, and base—the twinkling strobes and bright LED landing lights making the light-sport Remos GX look somehow bigger than its actual, diminutive size. The Rotax engine was near idle and barely audible as Blair turned final, crossed the runway threshold, and settled down lightly on the centerline. He slowed down, turned onto the taxiway, and let out a whoop on the CTAF that was loud enough to hear without a radio.

This was an important milestone for him, after all.

He was beaming as he taxied by and took off again. The second landing was as good as the first, and he came back for the third and final circuit.

Despite Blair’s damaged legs, his rudder acuity is light and crisp, and I noticed the rudder moving actively as he kept the airplane’s nosewheel on the centerline. On final approach, someone asked a question on the radio about the Remos’ registration number and Blair started to answer. That brought my only mild censure of the day as I keyed the mic and admonished him to “Concentrate!”

I needn’t have been concerned as the third landing was a greaser, too. Over the radio, I asked Blair to taxi to the AOPA ramp and shut down. There, the beaming student pilot was met by AOPA staffers who congratulated him on his achievement. I got to trim his shirttail—another aviation tradition that caught Blair off guard. But don’t worry. The shirttail will be returned, appropriately decorated, in good time, as a keepsake from this happy milestone.

Far from being a minor footnote in Blair’s tumultuous life, he said flying, and the few hours he’s spent aloft in pursuit of becoming a sport pilot, has already affected him.

“It’s given me a new and different perspective on everything,” he said. “It’s something I’ve always wanted to do, and it’s helping me regroup and find my way again. There’s no way I can adequately explain how important that is to me right now.”