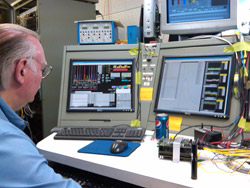 A GAMI employee gives a briefing on the company's work to find a replacement for avgas.

AOPA President Craig Fuller and senior members of the association’s government affairs staff traveled to Ada, Okla., July 7 for a demonstration of one of the possible solutions in the search for an unleaded aviation gasoline. Joining them at General Aviation Modifications, Inc. (GAMI) was Cessna Aircraft Company President and CEO Jack Pelton.

“The dilemma of how to remove lead from avgas without affecting safety of flight has vexed our industry for years,” said Fuller. “So it is important that AOPA, as part of a general aviation avgas coalition, look at all potential solutions. That’s why we’re at GAMI again—to get an update on how their work on a fuel alternative is progressing.” (Learn more about GAMI's fuel, G100UL, in "Look, Ma, no lead.")

In a recent meeting with representatives of FAA Administrator Randy Babbitt, the coalition called on the agency to take a leadership role in the issue by convening a working group that will oversee the process.

“Leadership by the FAA is vital at this juncture in order to remove any unnecessary or outdated hurdles,” said Fuller. “Such hurdles could delay the development and delivery of new products and should be removed if they provide no safety benefit.”

This was AOPA’s second meeting with GAMI to see their work on a 100LL alternative. Fuller has also met with and received an extensive briefing from Swift Fuels, another company that is working on a 100LL replacement.

GAMI provided an interesting demonstration of how the company is utilizing its engine test cell capability to develop fuel blends with the goal of developing a future unleaded fuel that meets the needs of high performance aircraft. Additionally, GAMI is using its fuel in a turbocharged Cirrus aircraft, is pursuing an STC, and this week began the process of developing a fuel standard through ASTM International.

“The general aviation avgas coalition looks forward to seeing data from GAMI, Swift, and any others who may have a potential solution,” said Rob Hackman, AOPA’s vice president of regulatory affairs. “With that data, we can examine the production, distribution, performance, emissions, and economic impacts associated with any given proposed alternative.”

In the coming weeks and months, AOPA plans to continue to visit many of the key players in the avgas issue including suppliers and aircraft and engine manufacturers, as well companies such as GAMI and Swift that are developing potential solutions.

The coalition continues to work on numerous fronts as well. Coalition representatives met recently with the group responsible for developing fuel specifications to discuss a possible ultra-low-lead avgas formulation, which is seen as a potential interim step on the way to unleaded avgas. The group, under ASTM International, is pursuing the possibility and will make an initial recommendation by their next meeting in December.