Get the app Get the app
Already a member? Please login below for an enhanced experience. Not a member? Join today
News & Media Tenacity wins radar for Utah airport 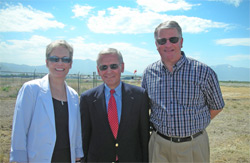 Eleven years of tenacity, cheerleading, refusal to take no for an answer, and a team effort has produced a radar facility for the airspace around Provo, Utah, reports Greg Soter, AOPA Airport Support Network volunteer at Provo Municipal Airport. Construction of the Beacon Interrogator-6 Air Surveillance System started June 29.

“That's a big name for the equipment you and I know as '[terminal] radar.' We've been pushing for this badly-needed system for 11 years, and we finally got it," said Soter.

Lewis Billings, Provo's former mayor, emphasized that the project survived intense competition with other facilities’ requests from airports nationwide thanks to a united effort among local government, Utah's legislature, the state's congressional delegation, and others.

"When there's limited money to pay for a lot of projects needed at airports nationwide, not everything's going to get approved and funded," said Billings. "We were told 'No' on more than one occasion. But when a serious need exists, and the right team of people responds to the FAA with a polite, 'We really need to keep discussing this radar,' good things happen.”

Two million dollars of the $4 million project is being paid for with local and state funds, and the other $2 million with FAA funds.

"The contribution that a local pilot can make to the success of a project like this is huge," Soter said. "Patience and tenacity are the key. Talking to elected officials about the safety impact of radar, writing letters, and having discussions with whoever will listen all combine to yield significant impact.

“My job in this effort has been to patiently keep pushing it along for the past 11 years. Persistence and grit eventually win the day. I feel like part lobbyist and part cheerleader. That's how we got the tower we needed four years ago, and now the radar. A proactive pilot at any airport can help pull off similar successes."