Get the app Get the app
AOPA will be closed July 4th, in observance of the Independence Day holiday. We will reopen at 8:30 am ET on Tuesday, July 5.
News & Media W.Va. gov. announces bid for Senate seat 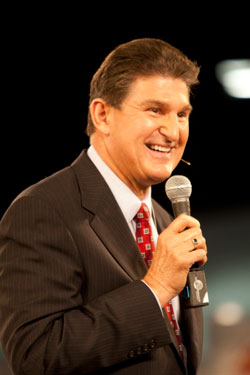 West Virginia Gov. Joe Manchin III, a passionate pilot and AOPA member, has worked to promote general aviation in his state. Now he might get the opportunity to share his knowledge of aviation on Capitol Hill.

Manchin announced July 20 that he will run for the late Sen. Robert Byrd’s Senate seat in a special election. Manchin had appointed Carte Goodwin, his former general counsel, to temporarily fill the seat. Byrd, the longest-serving member of Congress, died June 28 at the age of 92.

"As a longtime aircraft owner and pilot, Gov. Joe Manchin brings first-hand knowledge to conversations about general aviation issues,” said AOPA President Craig Fuller. “He knows, from personal experience, just how effective general aviation is as a tool for business, for personal transportation, and for building the economy. That depth of understanding has made him a powerful advocate for general aviation in his home state of West Virginia and beyond."

Manchin, elected as West Virginia’s thirty-fourth governor in 2005, has been through recurrent training at FlightSafety International and flies the state’s Cessna Caravan for business travel. Of the state’s choice to buy a Caravan, Manchin told AOPA Pilot,“This is an aircraft that we could fly into almost every short-field operation, with almost the utility of a helicopter, but with the mobility of being able to take the bomb squad with their robot, or the SWAT or rescue teams. It’s so versatile; a multi-mission machine.” (Read more about Manchin’s flying career in the January 2010 AOPA Pilot.)

In January, he issued a proclamation dubbing the month “General Aviation Appreciation Month” in recognition of the industry’s contribution to the state’s economy and job growth.

AOPA worked on GA issues with Manchin in 2009, meeting with him in August that year to discuss the value of airports and hosting him at AOPA Aviation Summit in Tampa, Fla. Manchin served as the keynote speaker during AOPA’s GA Serves America Rally at Summit, encouraging all pilots to get involved in protecting the industry, saying, “If we do away with general aviation as we know it today, God help us, we’ll never be able to get it back.”