Get the app Get the app
AOPA will be closed July 4th, in observance of the Independence Day holiday. We will reopen at 8:30 am ET on Tuesday, July 5.
News & Media GA advocacy groups stand united on avgas issue 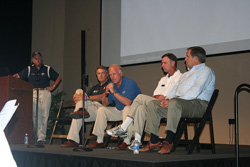 The general aviation community is on the path to finding a viable solution to the problem of leaded avgas—together—association heads assured type clubs and the press in a briefing at EAA AirVenture July 27.

Senior regulatory affairs staff and GA association heads of a coalition dedicated to addressing the issue of leaded avgas outlined their short- and long-term plan to address pressures to reduce and remove the lead from aviation fuel. It’s a complicated issue, the association presidents acknowledged, but one they are committed to addressing as a united front.

“This issue is probably the most important issue we’ve faced as a community in a long time,” Poberezny said. The associations are in a marathon, not a sprint, he explained.

The industry currently faces two separate challenges regarding leaded avgas: In the short term, it must reduce lead emissions by 2017; and in the long term, it faces the regulatory process set in motion by an advanced notice of proposed rulemaking that has the potential to advance the elimination of lead from avgas. The latter has no deadline and does not spell a certain ban on lead. The coalition is working on short- and long-term efforts. They are working to determine how much the industry can reduce the lead content of avgas without affecting performance. This reduction would address the short-term issue and allow the industry to work toward a long-term solution. Long-term efforts are focused on establishing a path that will allow for the full evaluation of any potential solution to provide the industry with the information needed to make well-informed decisions.

There’s no need to be “Chicken Little” about the transition, Coyne said. But at the same time, GA groups will not sit by and pretend the issue does not need to be addressed. “This is not a time for us to stick our head in the sand. … We clearly have an issue that calls out for leadership.”

It calls for leadership from industry groups, but also from the FAA, Fuller said. FAA Administrator Randy Babbitt and senior FAA staff have been accessible to GA groups, he said, and understand the issues at hand.

While the industry works toward the long-term goal of developing specifications for, certifying, and transitioning to an unleaded fuel, the associations support gathering as much data as possible now to help inform decisions down the line—that means supplemental type certificate processes alongside the ASTM process, which sets the ultimate standards for a fuel.