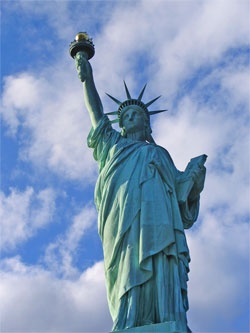 A pilot flying a trike received a police helicopter escort May 31 after flying close to the Statue of Liberty. According to press reports, the pilot was escorted to nearby Westchester County Airport in White Plains, N.Y.

The pilot told reporters that he didn’t realize security was so tight in the New York City area.

The event underscores that pilots need to be extra cautious when flying in sensitive areas, especially on major holidays. New York City contains some of the most sensitive airspace in the United States—and with the recent car bomb attempt, anything that seems out of ordinary could be scrutinized.

In addition to these regulations, pilots must fly within a certain speed range; turn on anticollision and position/navigation lights (landing light recommended); self announce aircraft position on the appropriate frequency; and carry a current New York Terminal Area Chart or New York Helicopter Route Chart and be familiar with the information on it. The special flight rules area also includes mandatory checkpoints (which are marked on the charts) at which point pilots must announce their aircraft type, current position, direction of flight, and altitude. The FAA has developed an online course to help pilots understand the procedures.

“GA pilots by and large follow the rules to the letter,” said Brittney Miculka, AOPA manager of security and borders, “and that’s why the FAA and other government agencies are willing to work with AOPA and other GA associations to keep the airspace open to pilots.”

Pilots should always receive a pre-flight briefing for their route of flight, Miculka recommended. This not only alerts pilots to temporary flight restrictions along their route of flight but also to airspace requirements that they otherwise might not know or understand.