Get the app Get the app
Already a member? Please login below for an enhanced experience. Not a member? Join today
News & Media Bravo: Airspace changes to sweep the country 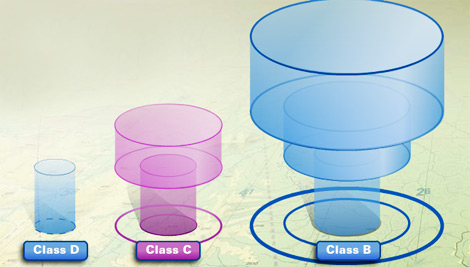 Airspace around major cities will be getting a facelift this year, and pilots have the opportunity to decide what the new airspace will look like.

The FAA will propose modifications to nearly half of the Class B airspace areas across the country (it takes two to three years for a redesign process to be completed). The agency biennially reviews airport operations and airspace needs to identify which areas need to be modified, but the task of modifying 14 Class B areas all at once isn’t the norm.

“In the past 10 years, we’ve never seen this many airspace areas being modified at one time,” said Heidi Williams, AOPA senior director of airspace and modernization.

The changes stem from safety concerns related to airliners spilling out of Class B airspace during instrument arrivals. As long as the airliners are within Class B airspace, air traffic control can ensure separation between the aircraft; however, once the airliners exit the airspace, ATC can no longer guarantee that separation. In addition, FAA officials told AOPA that some Class B areas were designed in the 1970s and that the airspace needed to be reviewed and changed, if necessary, to keep pace with new procedures and traffic levels.

Some might fear that means Class B airspace will be expanding. But that’s not always the case. AOPA has been aggressively working with the FAA and other airspace users to modify Class B areas in a way that contains instrument procedures while cutting any unneeded portions. So far, the process has started in Chicago, Detroit, Charlotte, Seattle, Philadelphia, Cleveland, New York, and Atlanta; other Class B airspace slated for review and possible modification include Las Vegas, Salt Lake City, Miami, Minneapolis, Cincinnati, and Washington/Baltimore.

“Right now, the general aviation industry has a huge opportunity to shape Class B airspace around the nation,” Williams said. “AOPA is working to ensure the changes are a positive move for GA operations, and we’ll be alerting pilots of when they can be part of the process and provide input.”

Next: Sticking up for pilots >>