Get the app Get the app
Already a member? Please login below for an enhanced experience. Not a member? Join today
News & Media Skycatcher reaches the rental fleet 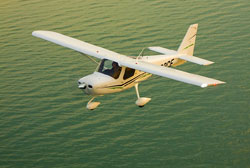 There’s at least one place in the country you can rent a Cessna 162 Skycatcher, and it is right across the airport from the Cessna factory. Kansas Aviation Inc., based in Yingling Aviation facilities at Wichita Mid-Continent Airport, becomes the first flight school to offer the aircraft for rent—at $98 per hour.

Operators interviewed in California last year also indicated they would try to stay around the $100 per hour rental charge, although some indicated they might charge $110 to $120. The prices are in keeping with light sport aircraft rentals available elsewhere in the nation for other brands of LSA.

Now, the effort by Cessna to make the Skycatcher the next ubiquitous trainer is up to the public. (LSA can be used for the private as well as the sport pilot certificate.) An operator in San Jose, Calif., said he would put the Skycatcher on the flight line with his Remos LSAs and see which his customers preferred. It also may be up to mechanics and flight schools, as well as customers, as soon as operating costs, ease of repair, and maintenance costs are known.

“The advent of the Skycatcher era is really a reminder of bygone days when it comes to the cost of renting an airplane for flight training or leisure flying,” said Dave Tiday, manager and chief flight instructor at Kansas Aviation. “We believe the Skycatcher will be key to developing the next generation of pilots who will be needed to fill the pipeline for the aviation industry in the decades ahead.”

The 162 Skycatcher is a two-place, single-engine piston, high-wing aircraft in the LSA category, defined in the United States as an aircraft with a gross weight under 1,320 pounds and with a top speed of no more than 120 knots. LSAs are built to comply with ASTM International standards.

It is powered by a 100-horsepower Continental O-200D engine with a fixed-pitch propeller. Cruising at speeds up to 118 knots, it has a maximum range of 470 nautical miles. The Skycatcher features a Garmin G300 avionics system with a single, split-screen primary flight display and a multi-function display. An optional second screen is available, permitting two full-screen displays. The aircraft is approved for VFR/day/night operations.

Wichita’s Yingling Aviation was selected as one of three domestic re-assembly sites for the Skycatcher in January of 2008. Kansas Aviation leases classroom, office and hangar space from Yingling at Wichita Mid-Continent Airport.