Flight for the Human Spirit reaches the halfway point 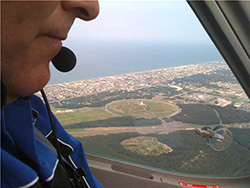 Michael Combs, in the cockpit of the Remos GX, flies past the Wright Brothers National Memorial in Kill Devil Hills, N.C.

Michael Combs reached the halfway point on the Flight for the Human Spirit June 9, flying from North Carolina to Florida that week and exceeding 11,000 miles.

Combs was delayed briefly at First Flight Airport in Kill Devil Hills, N.C., when the Remos GX sustained a flat tire at the scenic airport. He visited the Wright Brothers National Memorial, which is a short walk from the airport, while waiting for a new tire to arrive. The flight resumed the next day.

While waiting for repairs to take place, Combs remarked in a podcast about the brothers’ achievement. “That 120 feet [flown on Dec. 17, 1903] changed the history of mankind forever,” he said. The Wrights’ tenacity, he said, was a remarkable aspect of their achievement. “They would not accept defeat.”

After departing North Carolina, Combs made a series of stops in Florida, encountering Florida’s infamous afternoon-thunderstorm weather cycle but remaining well clear of any convective activity.

For the latest on the Flight for the Human Spirit, including podcasts, itineraries, and videos, see the website, or follow his progress on AOPA Online.