Get the app Get the app
Already a member? Please login below for an enhanced experience. Not a member? Join today
News & Media Pilots camp out, fix up backcountry strips 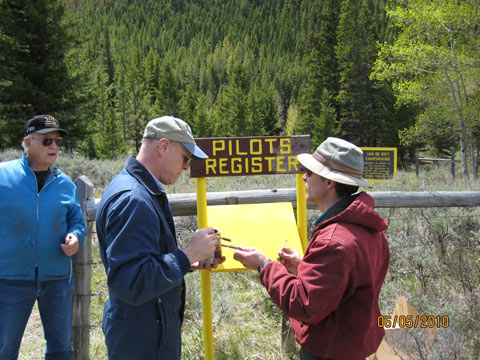 Nestled in a valley between mountain ridges west of Great Falls, Mont., Benchmark Airport serves as a trailhead to the Bob Marshall Wilderness. The airport, built as a backcountry strip in the 1960s by the Forest Service, FAA, and Montana Aeronautics Commission, features a camp site on the south end complete with picnic tables, campfire grills, tent sites, and a pitcher pump well providing fresh water.

“It’s unusual for a backcountry strip because it’s paved,” said AOPA Northwest Regional Representative Mike Ferguson. The strip also can be accessed by road and other trails. An outfitter post is located nearby for groups traveling with horses and pack mules.

But the airport needs regular maintenance and upkeep because of the harsh winters and other weather conditions that wear on the facility.

The Montana Pilots Association (MPA), Helena Hangar of the MPA, the Montana Aeronautics Division (formerly the commission), and a member of the Recreational Aviation Foundation joined together in June to spray the cracks in the runway and tiedown areas to kill weeds, install new windsocks, re-stain picnic tables, and paint and repair some signs. Ferguson and three other pilots camped overnight in below-freezing temperatures during the weekend project. Ferguson likened the Helena Hangar of the MPA’s participation in the work sessions as an “adopt an airport” effort.

Although Ferguson has a deep passion for backcountry strips, these work sessions hold a special part in his heart: He started the work sessions during his 27-year stint as the administrator of the Montana Aeronautics Division. 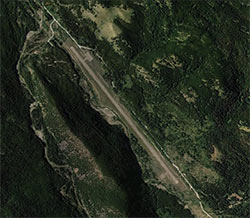 “I work on them every year,” said Ferguson, who flew in one of the eight aircraft despite strong winds and turbulence to spend a weekend upgrading the airport. “I always volunteer and go in.”

The MPA and the late Ray Van De Riet were key in developing the camp site at the airport and making the early work sessions a success. The Van De Riet family installed a new memorial sign for the late cattle rancher in June.

More work sessions are scheduled this summer, including Meadow Creek at the end of June and Schafer in July. Both of those strips are accessible only by air, foot, or horseback.

“It’s a big volunteer effort,” Ferguson said, adding that the way the Forest Service, state, and pilots work together to maintain these strips is an example other areas with backcountry airports should follow.