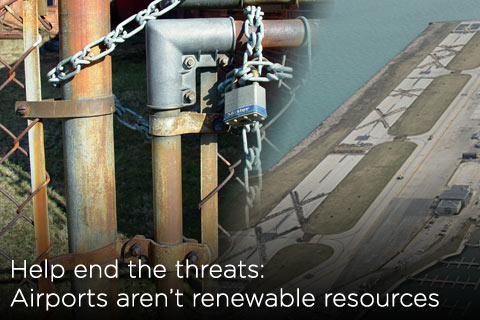 Airports are as vital to pilots as their aircraft, but these facilities are increasingly coming under attack.

“Many pilots think ‘It can’t happen at my airport,’ but it does,” said AOPA Airport Support Network Director Joey Colleran. “Every week we hear from 20 AOPA members who have concerns about their airport. It’s just a matter of time before ‘it happens’ at your airport.”

Because of the demands of urban expansion, building a new airport after one has closed is difficult. That’s why AOPA works to protect nearly 5,200 public-use airports and 14,500 private-use airports in the country. But pilots must step up to help, Colleran said.

In the 1990s, airports were closing at an alarming rate, with 67 in 1994, according to the “FAA Abandoned Airports Report” that year, which included heliports, seaplane bases, and airports. AOPA created the Airport Support Network in 1997 to help promote, protect, and defend general aviation airports. Since then, the network has grown to more than 2,000 volunteers and has made a dramatic impact. Last year, 16 airports were closed.

One of the keys to this reduction is pilots’ and ASN volunteers’ active participation in promoting their airports.

“If the local community and city officials understand the value of the airport, they’ll support it,” Colleran said.

Pilots at New Smyrna Beach Municipal Airport know the importance of promoting their airport. Three years after a developer proposed to build a residential development on the approach end of Runway 2, which would effectively close the runway, controversy about the proposal and noise concerns still abound at the airport. So far, pilots have been successful in preventing the development.

ASN volunteer Paul Rooy and airport supporters formed Friends of New Smyrna Beach Airport in 2007 to counter the threats and to promote and advocate for the airport. (Get tips for forming an airport support group.) The group organizes airport tenants to attend meetings, write letters, negotiate concerns with airport management, and host airport events that attract the community.

“Bringing residents out to the airport is the perfect opportunity to educate them on the many services the airport provides, from business flights to emergency medical evacuations,” explained AOPA Manager of Airport Policy John Collins. “It also helps them to feel like a part of the aviation community.”

In addition to promoting the airport through an open house, the Friends of New Smyrna Beach Airport also have tackled the economic importance of the airport, sponsoring an economic study that highlights the economic activity, jobs, and other benefits that the airport provides to the community.

“Economic studies can be particularly convincing with city and county elected officials,” Collins said. For airport support groups that do not have the resources to sponsor an economic study, AOPA has compiled links to economic impact studies that have been conducted throughout the country.