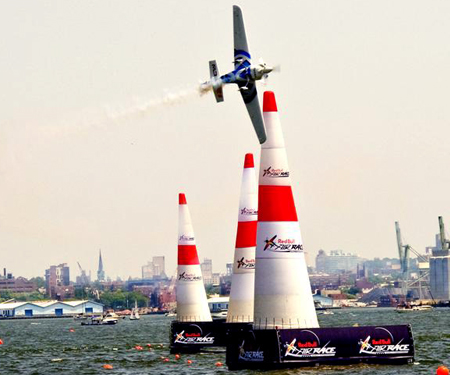 It was an honor both Kirby Chambliss and Michael Goulian wanted, a win or a podium appearance in the Red Bull Air Race. The race travels internationally and has never before been in New York. Only Chambliss was able to pull it off.

Goulian had a minor error that cost him a penalty, dropping him to seventh when he was threatening to take the fourth-place finish. Chambliss got the third-place finish, and a spot on the podium, but was only three-hundredths of a second away from coming in second. 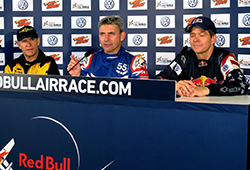 Winning in New York was Paul Bonhomme of Britain, with fellow British pilot Nigel Lamb taking second place. The crowd was smaller than predicted at 75,000 people.

The Red Bull Air Race took place within sight of the Statue of Liberty from the New Jersey shore. It brings the best pilots in the world down to 50 feet well in excess of 200 mph to make tight 10- to 12-G turns through a circular slalom course of inflatable pylons. They are made in sections and harmlessly separate when struck by an aircraft. Aircraft are also required to pass through pylon gates either perfectly wings level, or perfectly knife-edge in a 90-degree bank. It takes less than 80 seconds to complete the course.

Red Bull has turned the Air Race, one of several events it sponsors involving several sports, into a marketing machine. Later this year it will sponsor an attempt to drop a parachutist from a balloon well above 100,000 feet.