Get the app Get the app
AOPA will be closed July 4th, in observance of the Independence Day holiday. We will reopen at 8:30 am ET on Tuesday, July 5.
News & Media U.S., Canada AOPA presidents fly in for COPA Migration 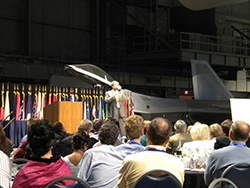 Before discussing the top three issues facing GA, Fuller shared one of his more memorable moments at AOPA with the group.

Psutka and Fuller then spoke to about 200 pilots in attendance about the top three challenges each organization is facing. Psutka cited his organization’s concerns about unmanned aerial systems, security policies, and keeping Canada’s borders and airports open. Fuller explained three of AOPA’s top initiatives, which include increasing the pilot population; helping to shape NextGen, the modernized air traffic control system; and finding a replacement for 100LL, which proved to be the hottest topic at the event. After the migration event, Fuller stayed in Dayton to meet with Cirrus owners and representatives from other type clubs to discuss the association’s efforts on finding an avgas replacement.

The key to success on all of these issues facing pilots in Canada and the United States is to be active, engaged members of the GA community, Fuller stressed.

”With so much going on, it’s vital that we all get engaged in keeping GA strong,“ he encouraged pilots. ”If each of us does just a few things, we can make an enormous difference in the future of GA.“