Get the app Get the app
Already a member? Please login below for an enhanced experience. Not a member? Join today
News & Media Politicians and Planes

All in is the best bet 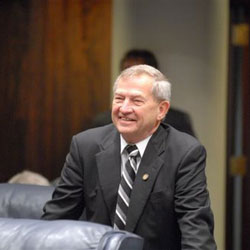 Florida Sen. Mike Bennett has been involved in aviation issues to address what he calls “the crazy things”—such as a use tax of up to 6 percent of an aircraft’s value for visiting aircraft owners, which was recently addressed with an exemption.

Mike Bennett was in the copilot’s seat when the Cessna 210’s engine failed over the Everglades at night.

He and three other men were at 6,000 feet on their way home from Miami, after returning on a commercial flight from a fishing trip to Venezuela. They agreed to leave the landing gear of the Cessna 210 up because they thought it would be safer if they had to land in the swamp, and it reduced drag as they looked for a landing spot in the darkness. “You know how dark it is out over the Everglades at night? There ain’t nothing out there,” Bennett said, recalling the incident. They glided to Opa-Locka West, an airport at the edge of the wetlands that was closed in 2006.

The gear-up landing jostled baggage in the back, which pinned one of the rear-seat passengers. The other three on board looked for a knife to cut him free from the seat belt but couldn’t find one; they were able to move enough luggage to pull him free.

They all walked away from the landing, and within the hour were sitting in a restaurant drinking scotch. The incident didn’t deter Bennett, then a student pilot, from continuing his training, but he did have to make a promise to his wife: “Unless I flew a lot, I wouldn’t fly at all,” he said.

More than a decade later, after 40 years of flying with other pilots and training off and on, Bennett—now a Florida state senator—earned his private pilot certificate this May. He still carries a switchblade inscribed with the tail number of that Cessna 210 as a memento of that flight—and as assurance that he’ll always have a knife if the need arises.

A consummate businessman, Bennett brings an industrious spirit to his work in the Florida Senate. He has been turning that energy recently to issues that he feels as a pilot: high costs for general aviation.

40 years in the making

As a crew chief in the Navy serving in Vietnam, Bennett knew all about the H-34 helicopters he rode in, hopped in and out of, and worked on. But he didn’t take the flight controls until after the war.

His interest piqued from his experience in military aircraft, Bennett started flight training in GA airplanes after he got out of the Navy. He logged about 40 hours of the training when he ran out of money, and he didn’t really pick it up again until the 1990s. It was during that decade that his escapade over the Everglades prompted his wife’s call to get serious or get out. 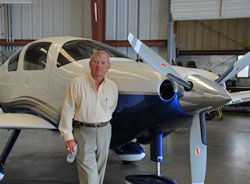 Bennett flew with other pilots for years before finally taking his checkride. Shown here with a Columbia 400.

Still, he flew with other pilots and didn’t really see the need to get his certificate. In December 2009, frequent flying companion David Ramba convinced him to take his knowledge test and start the final push toward a certificate. Ramba said it was a bit of work getting Bennett to embrace Sporty’s computerized test prep, but he shows a greater interest in technology in the cockpit, such as the XM weather and electronic flight bag in Ramba’s Cirrus.

“We’re getting him into the modern, technological age,” he said. “You put him in the cockpit, and he’s a very able, very responsible pilot.”

Ramba encouraged Bennett to continue with his flight training, which he did in the early hours of the mornings before the Senate convened this session. Bennett took his checkride just after the session ended, and he has already moved on toward the next aviation milestone; now Ramba accompanies Bennett on flights back and forth from Tallahassee and encourages him in moving forward with his instrument rating.

“I can’t concentrate on one thing too long—I gotta do something else,” Bennett said. 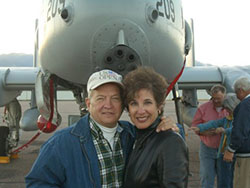 Bennett with his wife of 43 years, in front of an A-10 “Warthog.” His wife, Dee, told him he should either fly a lot or not fly at all.

As a businessman, Bennett got involved in politics because he was frustrated with government bureaucracy and wanted to bring change. Ramba, who often flies with Bennett in Ramba’s Cirrus or Bennett’s Cessna 182, said Bennett approaches challenges in office as he would a business problem—taking action immediately, and not putting the task on a list to do later. He applies that energy to problems he sees as a pilot.

Much of Bennett’s flight time includes travel to and from Tallahassee for Senate sessions and traveling the state for Republican Party events and political campaigns. Traveling via airlines or car from his home in Bradenton to the state capital would take four and a half hours, and the flight in his Cessna 182, which he owns with a partner, cuts it down to an hour and a half. He has been involved in aviation issues in the Senate to address what he calls “the crazy things”—like the tax system that had meant out-of-state aircraft owners could be subjected to Florida’s 6 percent use tax just for visiting the state within six months of purchasing an aircraft, even though they have already paid the sales tax for their own state.

“He’s a good advocate for pilots out there because now he’s seeing it, … and doing it, every day,” Ramba said.

Bennett has figured out how to use his office to help, Ramba said. “He enjoys life. He is a very loyal person,” Ramba said. “… If you were driving home late and you were 20 miles outside of Sarasota and you got a flat tire, you’d call Mike Bennett.” For other problems, you can at least be sure he’ll have a knife handy.