Get the app Get the app
Already a member? Please login below for an enhanced experience. Not a member? Join today
News & Media Reno-Tahoe advocates speak out for GA

Reno-Tahoe advocates speak out for GA 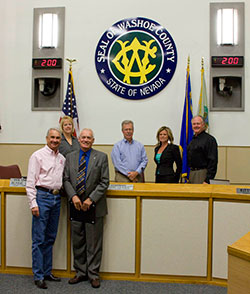 Advocates for general aviation at Reno-Tahoe International Airport are digging in their heels for a long fight to keep GA from being forced out.

On a recent trip to Reno, AOPA Vice President of Airport Advocacy Bill Dunn met with local general aviation advocates to provide advice and reinforcements on fighting to keep a foothold at the airport. Local support for GA at Reno-Tahoe manifested itself as a new local aviation association and a formal statement of support from the Washoe County Board of Commissioners.

“The formation of the Reno-Tahoe Aviation Association and the board’s recognition of the importance of GA are positive steps, and AOPA is committed to providing support in this fight,” Dunn said. “This issue is a marathon and not a sprint to the finish line, so members of the aviation community must continue to be engaged and active.”

The Reno-Tahoe Aviation Association was formed to provide advocacy for local pilots based at Reno-Tahoe following the announcement earlier this year that the long-term leases of two existing FBOs were not being renewed. The Reno-Tahoe Airport Authority is taking over hangar rentals, indicating that it will rent hangars to existing tenants for a minimum of two years or until new GA hangars are built at Reno/Stead Airport. Then, existing Reno-Tahoe tenants will be given first right of refusal at Stead. Tenants may face higher rates for the new hangars.

Dunn met with members of the association board of directors to provide advice on working the politics of the airport authority, and urged them to attend authority meetings and provide input to the authority board—steps that will keep them informed of developments and make sure their voice is heard throughout deliberations. He also advised them to establish working relationships with elected officials in the cities of Sparks and Reno, as well as Washoe County Commissioners who appoint the authority board members.

Dunn testified before the Washoe County Commissioners June 22 about the value and importance of GA, at the request of commissioner and AOPA Airport Support Network volunteer Robert Larkin. He discussed services provided by GA operators, as well as business development opportunities and the use of GA aircraft for emergency services and other purposes. He told the Commissioners that those wishing to continue to be based at RNO should be accommodated at RNO and not forced to relocate. 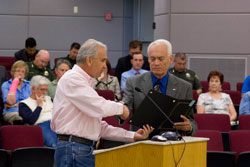 The commissioners wouldn’t build a road just for one type of user, he said. In the same way, it shouldn’t allow an airport to shut out all but one type of user. He asked the Commissioners to ensure that during the airport planning process that all users be accommodated at Reno-Tahoe and that the planning process must recognize the importance of providing GA facilities and services. Any aircraft that is based at Reno-Tahoe now should continue to be based there if that is what the aircraft owners want to do, he added. There should be no forced relocations.

At the end of the testimony, the board presented a unanimously approved resolution to Dunn recognizing the importance of GA and support for GA facilities at Reno-Tahoe.

Dunn’s visit also included a discussion with Krys Bart, president and CEO of the Reno-Tahoe Airport Authority, and her staff. Bart provided her perspective on the non-renewal of the FBO leases, and Dunn explained the importance of providing adequate facilities for GA.

“I told her that it was imperative that any GA aircraft owner or operator who was based at RNO must continue to be accommodated at RNO, and that AOPA opposed any forced relocation to another airport,” Dunn said. Bart explained that a proposal for another FBO is currently under review.

During his visit to the area, Dunn also spoke with AOPA Airport Support network volunteers about Reno-Tahoe and efforts by local pilots based at Spanish Springs Airport to have the county assume the lease so that the airport could receive development funding.