AOPA praises pilots willing to 'drop everything and fly' 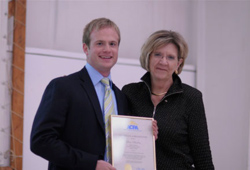 Pilot Sean Sanders with AOPA Foundation Karen Gebhart at Epps Aviation. Gebhart congratulated Sanders on his committment to helping others while using GA. Saunders flew back and forth to Haiti to deliver relief more than 10 times.

During a trip to Fort Myers, Fla., and Atlanta, Ga., March 1 and 2, Gebhart spoke of the state of aviation and how AOPA is engaging the public. She also recognized pilots and organizations that have gotten involved in their communities and in aviation: a pilot who donated his time and proficiency to help the Haitian relief efforts; his workplace, which contributed resources to the efforts; and the Atlanta Aero Club, which has reached out to state government in its support for aviation.

‘Can you drop everything…’

The question, “Can you drop everything and …?” is usually followed by pained groans and rolled eyes; this wasn’t the case for Sean Sanders, Epps Aviation, and many pilots across the country.

Epps Aviation is the only independent full-service FBO at Atlanta’s Dekalb-Peachtree Airport. Sanders, 26, works there and has a considerable amount of time logged in a Pilatus. After some consideration, and donations by Pilatus owners, Epps Aviation allowed Sanders to use his experience in the aircraft to help deliver aid to Haiti. “There’re not many planes you can fly at 30,000 feet and land on a 2,000-foot grass strip” he said about the aircraft.

Sanders would go on to deliver aid to Haiti more than ten times.

Speaking at a March 2 pilot town hall meeting at Dekalb-Peachtree Airport, Gebhart recognized Sanders and Epps Aviation for their efforts to help Haiti. She presented an award to Epps Aviation to thank the company for the personnel and resources they donated to the relief efforts. Later, Gebhart gave Sanders an award at the Epps hangar, thanking him for his service.

Presenting the award and recognizing general aviation at its finest was the pinnacle of Gebhart’s trip, during  which she talked to regional aviation enthusiasts about how GA serves them.

Many reasons why we fly

Gebhart’s trip started in Florida, where she praised the many uses of general aviation, and what AOPA and the Foundation have done to keep those many uses alive.

Page Field in Fort Myers, Fla. is one of many GA airports in the state; the airport has an association dedicated to making aviation operations safe and enjoyable. Any individual who does business on airport property is automatically a member. The association does not collect dues, and encourages anyone with a stake in the airport, from maintenance to air traffic control, FBOs to charter companies, to actively participate in the association.

Gebhart spoke to the Page Field Association March 1 about the state of general aviation, and what AOPA and the AOPA Foundation have done and will do in the future.

“We are your next-door neighbor. Your friend, your family member,” Gebhart said at the event. There are many reasons why we fly, and each one is no more important than another, she added. 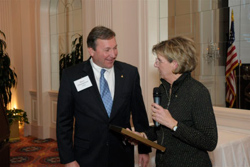 During her trip, Gebhart spoke at a meeting of the Atlanta Aero Club. The club is an active aviation community; with bi-monthly meetings involving top aviation leaders, members have made it clear that aviation is their passion, and they will do anything to keep it strong in their community.

Steve Champness, the president of the Aero Club, with his group successfully appealed to Georgia Gov. Sonny Perdue to issue a proclamation declaring October  “ Aviation Appreciation Month.” Perdue, an AOPA member of more than 30 years, signed the proclamation. In addition, Champness has helped grow the support of general aviation through actively engaging the public with the Aero Club, and encouraging local businesses to learn about the utility of GA.

At the club’s meeting on March 2, Gebhart congratulated Champness with a certificate of appreciation from AOPA President Craig Fuller for the work he and the Aero Club have done in Georgia to foster interest and grow GA.