Get the app Get the app
AOPA will be closed July 4th, in observance of the Independence Day holiday. We will reopen at 8:30 am ET on Tuesday, July 5.
News & Media AOPA, Calif. pilots speak up for Oceano airport 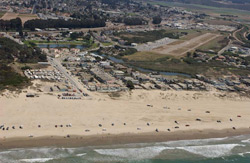 AOPA and California pilots are speaking out against a developer’s unsolicited plan to close the Oceano County Airport in Grover Beach so that it could be converted into residential and commercial uses.

Developer Jeff Edwards of Los Osos plans to hold a meeting on March 17 in which he will propose that San Luis Obispo County sell the property so that it can be put to other uses. On March 2 the San Luis Obispo County Board of Supervisors emphasized that the airport is not for sale, according to the San Luis Obispo Tribune. Supervisor Katcho Achadjian said that the airport has a million-dollar annual economic impact on the county. The county has received approximately $2.3 million in federal funds for its airports, which means they must remain open.

Edwards apparently has not had any discussions with the county about his plan, yet he still intends to hold a series of public meetings. While the pilot community is understandably alarmed, newspaper editorials and blog posts make it clear that local residents also support the continued operation of the airport, said Bill Dunn, AOPA vice president of local airport advocacy.

AOPA will be at the March 17 public meeting. Area pilots are urged to attend and speak up on behalf of Oceano. The meeting will be held at 5 p.m. at Rabobank, 899 Grand Ave., Grover Beach, Calif. Directly following the public meeting, Dunn will discuss airport issues of interest with pilots at a gathering hosted by AOPA member and Mooney Ambassadors founder Jolie Lucas. That event will be held at the Exploration Station, 867 Ramona Ave., Grover Beach.

Oceano County’s proximity to the Pacific Ocean makes it a favorite fly-in and camping destination. AOPA Pilot contributor Steve Ells, a California resident, has been to Oceano on numerous occasions, and he wrote about it for the August 2005 AOPA Pilot.

“There isn’t another airport around that better combines the joy and freedom of GA flying,” says Ells. “Oceano, unlike some other less-used airports, is very well maintained. The windsocks are bright orange, and the webcams on the Web site are a great marine-layer fog-checking tool for pilots.” On his last visit, Ells took a former employer who used to fly. “Within a very few minutes after tying down we were looking out on the Pacific Coast,” he says. The experience prompted his passenger to schedule a checkout so that he can get current again.