Get the app Get the app
AOPA Members DO more LEARN more SAVE more - Get MORE out of being a pilot - CLICK HERE
News & Media John L. Baker, pioneering GA advocate

See a video interview of John Baker conducted in August 2008 for AOPA Live by Warren Morningstar. As usual for John—even 20 years after he retired—he doesn’t mince words and, beware, he uses the colorful language that he is famous for. As you’ll see, there was little doubt where John stood on complex issues such as the ponderous workings of government and other concerns important to general aviation then and now.

John Lee Baker, AOPA’s president from 1977 through 1990, passed away early March 11 at his home in Angier, N.C. Baker, a Nebraska native and the son of a pilot, served as a U.S. Air Force fighter pilot in the Korean War, and then earned a law degree from Creighton University. He served on the staff of Sen. Roman Hruska (R-Neb.), and then was appointed assistant administrator in the FAA’s office of general aviation affairs.

Baker took the reins at AOPA in May 1977 and immediately became engaged in a series of initiatives aimed at the fair distribution of what was then a $4-plus billion surplus in the Aviation Trust Fund.  Because of Baker’s leadership, more than 3,000 GA airports eventually received improvements paid from the trust fund.

Among many other achievements, Baker navigated GA through the increasing airspace challenges of the late 1970s and early 1980s, beginning with the September 1978 midair collision between a Pacific Southwest Airlines Boeing 727 and a Cessna 172 near San Diego. He pioneered successful efforts to restrain ever-escalating demands to prevent GA aircraft from flying in the then-newly established Terminal Control Areas (today’s Class B), and persevered until high-density airspace boundaries were simplified in favor of GA operations. He was also key in preventing proposals to lower positive control airspace to 10,000 feet msl, establishing AOPA’s Political Action Committee, negotiating the cancellation of a proposed annual tax on GA aircraft, preventing the closure of 75 flight service stations, and in convincing senators to advance the first bills proposing changes to product liability laws adversely affecting GA manufacturers. 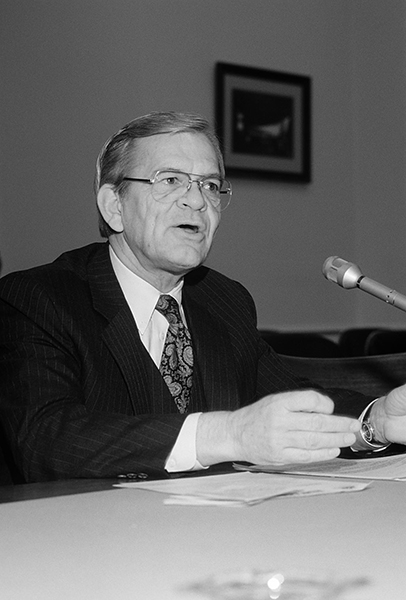 Baker’s successor, Phil Boyer, said of him, “He was a highly qualified leader who transformed AOPA from a large flying club to one of the world’s most successful membership organizations. His concentration on member-centric activities was as precise as his military flying. When I followed him, employees often quoted his line: “‘If you stiff a member, you’re out.”’

AOPA President Craig Fuller said, “John Baker was an extraordinary advocate for our freedom to fly and his passion for defending the interests of the general aviation community never waned. His work has had a lasting impact on our industry, and it was my good fortune to get to know John after I came to work in Washington, D.C., in 1981. From the time I served in the White House right up to today, I have valued his counsel.”

Services will be held this Sunday at the Bryan-Lee Funeral Home in Angier, N.C.

Look for more information on the life and times of John Baker in the May issue of AOPA Pilot.

AOPA Pilot Editor at Large
AOPA Pilot Editor at Large Tom Horne has worked at AOPA since the early 1980s. He began flying in 1975 and has an airline transport pilot and flight instructor certificates. He’s flown everything from ultralights to Gulfstreams and ferried numerous piston airplanes across the Atlantic.
Go to Thomas A. Horne's Profile
Topics: Advocacy