Get the app Get the app
Get the latest news on coronavirus impacts on general aviation, including what AOPA is doing to protect GA, event cancellations, advice for pilots to protect themselves, and more. Read More
Already a member? Please login below for an enhanced experience. Not a member? Join today
News & Media North Dakota honors aviation 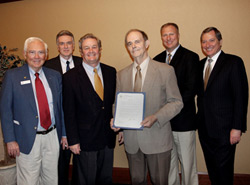 Aviation contributes $1.25 billion each year to the North Dakota economy and provides important services such as emergency ambulance flights. Gov. John Hoeven and Lt. Gov. Jack Dalrymple recognized the importance of aviation to their state by proclaiming March 7 through 13 North Dakota Aviation Week.

Dalrymple presented Hoeven’s proclamation March 8 at the Upper Midwest Aviation Symposium; the documents cites the critically important role that GA plays in the overall state economy and its value as a tool for transportation, emergency services, aerial application, wildlife control, and law enforcement. AOPA Central Regional Representative Bill Hamilton was on hand throughout the symposium.

Proclamations like the one in North Dakota illustrate that political leaders are aware of the many benefits of their state’s aviation industry. AOPA continually promotes the benefits of general aviation to lawmakers in each state and monitors all legislative actions that could affect GA.