Get the app Get the app
Already a member? Please login below for an enhanced experience. Not a member? Join today
News & Media Politicians & Planes

From CAP cadet to governor 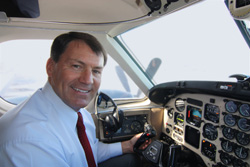 South Dakota Gov. Mike Rounds said flying for his duties as governor gives him a refreshing break from day-to-day activities: a chance to put everything else out of his mind and focus on flying. Photo courtesy of South Dakota Tourism

South Dakota Gov. Mike Rounds’ entrée into aviation came with the discovery of a hand-written advertisement while he was in junior high school.

“I’ll never forget what it said. It said, ‘Learn to fly, be a Civil Air Patrol Cadet,’” he said. Rounds took his first airplane ride through the CAP, soloed at 16, and earned his private pilot certificate on his seventeenth birthday. Now, in the seventh year of his governorship, he has instrument and commercial single- and multiengine ratings and continues to study for his air transport pilot certificate.

From his own first flight to the one he is planning for his grandson, aviation has been more than a business tool to Rounds. It has helped him cross expanses of geography, politics, and generations.

‘Up around the patch’

Rounds joined the CAP after finding that ad in junior high, and he went on his first flight with the family doctor, Buron O. Lindbloom. Lindbloom said he was doing some work with the CAP at that time and used to give orientation flights—“just take them up around that patch and that kind of stuff.”

“He came by and asked if my dad and I wanted to go on out and take a ride,” Rounds said. They flew around in Lindbloom’s Cherokee for about half an hour, he added, and the ride was “everything I hoped it would be. It convinced me that I most certainly wanted to not only fly but be a pilot.”

The CAP proved to be an excellent venue for a young and eager student to learn the basics of aeronautics. He found instruction and mentorship, both formal and unofficial, from the more experienced pilots like Lindbloom who passed on their aeronautical wisdom to the next generation. He started out with ground school coursework and soloed through a CAP program that provided $75 scholarships to students.

Rounds financed the rest of his training with after-school jobs. During his high school years, he was a press assistant at the Pierre Capital Journal, mowed lawns, shoveled snow, and delivered papers for extra income, his biography notes. That extra income went toward training in a Cessna 150, a Cessna 152, a Piper Cherokee 140, and a Mooney M-10 Cadet. “Back then, I think the cost of our aircraft started out at about $9 an hour,” he said.

After earning his private pilot certificate, Rounds continued studying, enrolling in an aeronautics class at Pierre Riggs High School and traveling to New Zealand for an international air cadet exchange program. He earned the Amelia Earhart Award during his time in the CAP.

Since his first classes in the CAP, Rounds has been a diligent student of aeronautics. He views his current work toward an ATP certificate as an expression of his continual striving to be a better pilot. “I think sometimes for some people they like reading novels,” he said. “Me? I like reading aeronautical instruction.” He doesn’t even mind reading the FARs once in a while, he said.

That first flight “up around the patch” with Lindbloom proved to be the beginning of a lifelong involvement in aviation—and a longtime friendship. Rounds ran into Lindbloom again after graduating from South Dakota State University in Brookings and returning to Pierre. Lindbloom bought insurance from Rounds, and the two got to talking about flying.

“All of a sudden, we end up as partners in a light twin, a Seneca,” Lindbloom said. The men sold the aircraft after Rounds became governor in 2003, but aviation still brings them together from time to time; Lindbloom is the chairman of the South Dakota Aeronautics Commission. 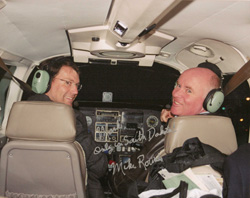 “Only in South Dakota,” Rounds wrote to opponent Mark Barnett (right), to whom he offered a ride when the two were campaigning against one another in the Republican gubernatorial primary.

In political campaigns, a pilot certificate is often the tool of an underdog. Candidates who cannot afford premium airtime for television ads can meet with voters directly, across large distances, for the cost of a tank of avgas. Rounds’ Piper Seneca served him well in his first run for governor, but it was an advantage he didn’t mind sacrificing if it meant helping out a colleague.

Rounds began his 2002 primary campaign with far less money and far less name recognition than the two Republican frontrunners. He relied on family members and volunteers, and traveled the state to meet with small groups of voters face to face.

With a land area of close to 76,000 square miles (about 400 miles wide and 200 miles tall, Rounds estimates) and about 10 people per square mile at last census count, South Dakota geography poses a challenge to any campaigner. The Seneca allowed Rounds to travel to events without wasting time on the road.

The governor’s son Chris recalled one such event after which both Rounds and his opponent Mark Barnett had to return quickly. Rounds offered up an extra seat in the Seneca, and Barnett hopped in. Chris cites a photograph his uncle took of the competitors sitting side by side in the airplane as an example of the tenor of South Dakota politics.

That’s not to say the race wasn’t competitive. But Rounds’ positive tone during the hard-fought primary contributed to an upset victory that set him on course to win the general election.

Now, Rounds flies left seat in the state King Air 200 for his state business travel. He said he learns from the copilots who fly with him, and his time in the cockpit gives him a refreshing break from day-to-day activities: a chance to put everything else out of his mind and focus on flying.

“When you’re flying, it demands all of your attention,” Rounds said. “… Once we’re in the aircraft, my staff knows that it is a time in which I am totally involved in the operation of the aircraft—other discussions don’t occur.”

As a member of the state aeronautics commission since 1987, Lindbloom said governors with aviation experience—like Rounds—may better understand the airport system in South Dakota. In his two terms as governor, Rounds has demonstrated an understanding of the value of aviation, particularly general aviation, to the state.

Rounds was instrumental in repealing a registration requirement that called for South Dakota pilots to hold a state registration certificate with a photograph on it; given the FAA requirement for pilots to carry a government-issued photo ID, the extra identification was unnecessary, he said.

One of his goals for South Dakota airports is to extend runways and add GPS approaches to make small airports more accessible to air ambulances. Most air ambulances in that part of the country are King Airs, he said, and he wants airports to be capable of handling that size aircraft.

“I think the general aviation community has been greatly maligned and misrepresented by individuals who do not understand the importance of air travel,” Rounds said. “… Particularly in some of our rural areas, the airlines are not the answer.” 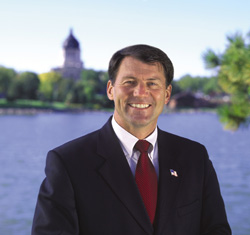 In his two terms as governor, Rounds has demonstrated an understanding of the value of aviation, particularly general aviation, to the state.

Sometimes it’s hard to describe the appeal of flying, Rounds said. He said he enjoys the experience “literally to move in three dimensions, and the ability to go from one location to another rather quickly.” He first experienced that sensation as a young boy, and as an adult he shared it with his own children.

Rounds’ oldest son, Chris, recalled how his father used to pick him up from cross-country meets in his Mooney if the events were hours away and he needed to get home early. Cutting a three-hour drive down to an hour-long flight proved useful—and once got Chris to a homecoming event on time—but those flights also introduced him to the freedom and enjoyment of flying.

Chris took up flying after college and is now a private pilot. He went to his father with all sorts of questions while he was studying for his checkride, he said, and now is asking a lot of questions again as he starts to work on his instrument ticket.

The two have recently been talking about taking Chris’ 3-year-old son out for a flight—Chris’ father-in-law owns an FBO in Pierre, and so it seems natural to introduce the next generation of the family to flying. “My son doesn’t have a chance,” Chris said. “Both grandpas fly, and he’s got an uncle that’s a pilot.” Whether they get a ride from grandpa or the family doctor, many seasoned aviators begin with a flight “up around the patch.”