Get the app Get the app
AOPA will be closed July 4th, in observance of the Independence Day holiday. We will reopen at 8:30 am ET on Tuesday, July 5.
News & Media 'I got to fly the plane!' 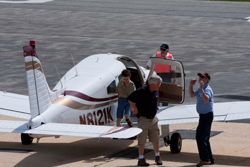 Anthony Brothers can't wait to tell his classmates about his first flight.

On Monday morning, Boy Scout Anthony Brothers will no doubt be the talk of his class. Not many 11 year olds in his Frederick, Md., school can boast the same exciting weekend.

“I got to fly the plane!” Brothers exclaimed to his mother, Pam, grinning from ear to ear after his EAA Young Eagles flight in a Piper Archer at Frederick Municipal Airport. If pictures of his flight aren’t enough to convince his classmates, he has a bright yellow EAA logbook with his pilot’s signature as proof. 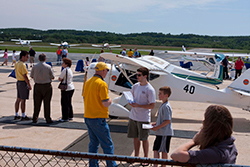 The flights were part of International Learn to Fly Day, announced last summer at EAA AirVenture, which encouraged the general aviation community to bring nonpilots to the airport to learn about flying. Frederick residents got a chance to see every segment of GA aircraft, with everything from a helicopter to a hot air balloon basket, a glider to a jet, and standard to experimental aircraft on display. Airport clubs and businesses, including Advanced Helicopter Concepts, Frederick Flight Center, the Sugar Loaf Chapter of The Ninety-Nines, EAA Chapter 524, and AOPA joined together on the ramp to get the community interested in flying and expand the pilot population. 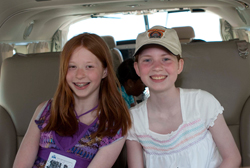 But nothing sparked the interest in GA more than someone taking his or her first flight, whether a child or adult. Throughout the day, more than two dozen individuals experienced their first flight.

“That’s the biggest rush I’ve had since skiing down a black diamond in Colorado or Europe,” said Karen Young, president pro tem of the Frederick Board of Aldermen. Young had flown with her father in his Piper Cherokee when she was looking for colleges but hadn’t been in a GA aircraft for years until a special flight May 15 in AOPA’s Fun to Fly Remos GX light sport aircraft. The experience opened Young’s eyes to the importance of city officials taking flights to survey their towns. 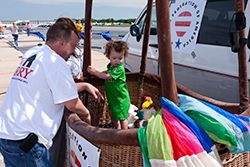 “Everyone who has a role in the planning function should see Frederick from the air,” Young said, mentioning various projects in the Frederick area.

Some teenagers also learned how to plan flights, pre-flight an aircraft, and fly a traffic pattern. The Women in Aviation, AOPA chapter, hosted Girl Scout troops from the Frederick area to help the girls work toward their aviation badge. After trying their hand at loops and rolls on a simulator in Patty Wagstaff’s Extra 300, the girls watched video of the aerobatic star performing and talking about the thrill and challenge of aerobatics. 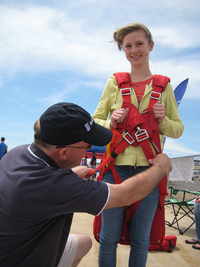 Barrel rolls on a first flight? That was part of the fun for Sophie Eureka who went up in a Decathlon.

Sophie Eureka, a 13-year-old Girl Scout, immersed herself in aviation, taking her first flight in a Decathlon. A pilot based at Frederick had arranged the flight independently of the planned events that day. “I think it’ll be fun,” she said before the flight. Not intimidated in the least by going flying for the first time, she opted to don a parachute in order to do aerobatics. A few climbs, descents, and two barrel rolls later, Eureka’s feet were once again on the ground, but she was already thinking about the future. She would like to become a pilot and learn how to do aerobatics.

After the flight, she got a better taste of aviation, working through the aviation stations with pilots in the Women in Aviation, AOPA chapter.

During the workshop, one lucky group of girls got the chance to meet AOPA President Craig Fuller and take a tour of the company’s Cessna Caravan. Fuller had flown to Sporty’s in Batavia, Ohio, to help kick off International Learn to Fly Day, and then traveled back to AOPA’s headquarters at Frederick to take part in the events and talk to members. 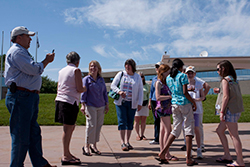 Although International Learn to Fly Day occurs only once a year, the joy of flight instilled in children and aviation enthusiasts who learned about GA will live on throughout the year and, for many of these enthusiasts, their entire lives. But in the short term, the day will dominate most topics of conversation for those who experienced it. “I think we’ll be talking about this for weeks,” Brothers’ mom said after his flight. After all, the budding future pilot needs to tell everyone, “I got to fly the plane!”