Get the app Get the app
Already a member? Please login below for an enhanced experience. Not a member? Join today
News & Media Outside the cockpit: Attracting people to GA

Outside the cockpit: Attracting people to GA The general aviation community needs to think outside the cockpit for ways to entice others to go out to their local airport and learn how to fly. AOPA is spearheading that effort in numerous ways, including different venues for its Pilot Town Hall meetings.

On May 21 and 22, AOPA President Craig Fuller spoke to pilots in San Antonio, Texas, and Blaine, Minn., respectively. Those who attended each Pilot Town Hall received a special treat—the opportunity to peruse historic aircraft. 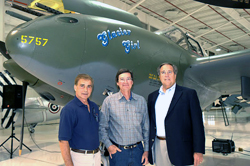 Rod Lewis, of Lewis Energy Group, opened his warbird collection—which includes Glacier Girl, the twin-boom fighter recovered from beneath 268 feet of ice on a remote icecap in Greenland—to 80 aviation enthusiasts in San Antonio.

More than 100 pilots and community members got the chance to tour the Golden Wings Flying Museum in Anoka County Airport in Blaine. The collection, owned by Greg Herrick, includes NASA’s first aircraft, the first aircraft to fly a pope, and aircraft flown by Charles Lindbergh and Amelia Earhart. In addition to Fuller’s Pilot Town Hall hosted by the Flywell Flying Club, the airport sponsored a fly-in event to attract the community. “We need to start thinking differently about how to attract people to general aviation and help them stay involved,” Fuller said. Aviation museums and airport events that appeal to the community are an example, he said, explaining some of the ways AOPA has been directly involved.

Earlier in May, AOPA hosted International Learn to Fly Day and some Girl Scout troops at Frederick Municipal Airport, home to the association in central Maryland. Nearly 30 individuals received first flights, and dozens of community residents came out to the airport to look at the aircraft on display. But AOPA also has reached out on the road, with its Road and Runway Rally that raced from Maryland to Florida for Sun ’n Fun in April, stopping at airports along the way to encourage the community to learn more about GA. Fuller also reached out to those in the California area during the Shape Up America campaign in March. Because pilots are encouraged to maintain a healthy lifestyle in order to keep their medical certificate, the health awareness event proved to be the perfect opportunity to help those already interested in their health to learn about flying.

But the GA community can’t relax after introducing others to GA, Fuller cautioned. “We also need to investigate why so many people who start flight training don’t finish,” Fuller said. About 70 percent of those who start don’t finish their training.

AOPA is researching flight training operations this year in an effort to discover ways to decrease the dropout rate. The association will share the results of the study during AOPA Aviation Summit in Long Beach, Calif., Nov. 11 through 13.