Get the app Get the app
Already a member? Please login below for an enhanced experience. Not a member? Join today
News & Media Asn 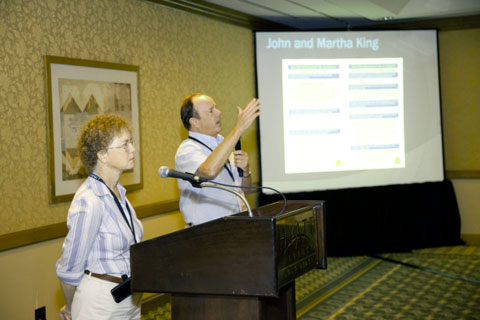 The Kings were mistakenly detained at gunpoint upon landing at Santa Barbara, Calif., on Aug. 28 by police who thought they had stolen a four-seat Cessna 172S.

"As ASN volunteers you have to deal with a lot of issues—this is just one more thing to have to worry about," said John King.

The Kings created a checklist for pilots to help them to be prepared in the event of an aircraft interception at an airport. The checklist also includes guides for law enforcement to follow. The Kings suggested that pilots become familiar with the ASN volunteer at their airport because the volunteers often have established channels of contact with officials who have an interest in the airport.

The meeting, which hosted more than 110 ASN volunteers, also highlighted the major issues facing airports across the country, including residential encroachment, land use, and noise complaints.

FAA Acting Associate Administrator of Airports Kate Lang spoke to the volunteers about the important partnership the FAA has with AOPA to keep airports open and safe. She explained that her staff often hears of issues first through AOPA’s ASN volunteers and that it is crucial to continue working together.

Lang also encouraged the ASN volunteers to work to explain the value of GA airports to their local communities. The FAA grants $1 billion in funding through the Airport Improvement Program to GA airports each year, she said, and it is important that the public understand that these airports aren’t for “fat cats.” They provide vital services and economic revenue to their local areas.

Another area ASN volunteers could play a crucial role in is encouraging pilots at their airports to report bird and wildlife strikes, Lang said. The FAA and NTSB are working to address safety concerns at airports due to wildlife, but the strikes must be reported in order for the FAA to make improvements.

ASN volunteers serve as AOPA’s eyes and ears at the local level and alert and work to promote, protect, and preserve their local community airport. Find out if your airport has a volunteer. If not, sign up today. —AOPA Publications staff