Get the app Get the app
Already a member? Please login below for an enhanced experience. Not a member? Join today
News & Media Caucus 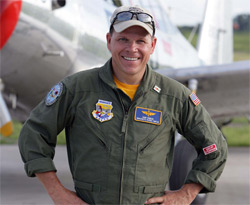 Rep. Vern Ehlers (R-Mich.) announced that he would be handing over the reins of the House General Aviation Caucus co-chair to fellow pilot Rep. Sam Graves (R-Mo.) when he retires from Congress at the end of this term. The surprise announcement came during an interview with AOPA President Craig Fuller on AOPA Live Nov. 12 at AOPA Aviation Summit.

“Rep. Sam Graves is a longtime supporter of and vocal advocate for general aviation among his congressional colleagues. We believe he is an excellent choice to succeed Congressman Vern Ehlers as the Republican co-chair of the House General Aviation Caucus,” said AOPA President Craig Fuller.

“At the same time, I would like to extend my thanks to Congressman Ehlers on behalf of AOPA and all our members. His leadership in helping to found the House GA Caucus and his steadfast support of general aviation throughout his time on Capitol Hill have made a real difference in protecting our freedom to fly. Although he is retiring from Congress, I can’t imagine him sitting still for too long.

“The Caucus that he helped establish, and that Congressman Graves will now help lead, has grown to be one of the biggest on Capitol Hill. The work of its members will be vital as the next Congress attempts to pass a long-term FAA funding bill.”

Ehlers helped form the House GA Caucus in 2009, and since then it has grown to more than 100 members. Members of the caucus educate their colleagues on Capitol Hill about the value of GA and the vital role it plays in our national aviation infrastructure and the economy. —AOPA ePublishing staff