Get the app Get the app
News & Media Airportfest (3)

Classic and modern: It’s all at Airportfest

The old and the new blended seamlessly at Airportfest this week, as visitors to Long Beach/Daugherty Field got a chance to see a mix of aircraft dating from pre-World War II to today’s sleekest business jets.

A second day of beautiful weather on Nov. 12 brought out throngs of people to the airport, where an array of 100 aircraft provided a chance to see how far aviation has advanced just in the last 50 years. Glass cockpit avionics, ballistic parachutes, and other safety features were on prominent display.

The classic designs and features of older aircraft such as the Lockheed Electra Junior were a point of appreciation as well. The highly polished Electra caught sunlight like a beacon, drawing many admirers, as did the legendary Boeing B-29 Superfortress known as Fifi. 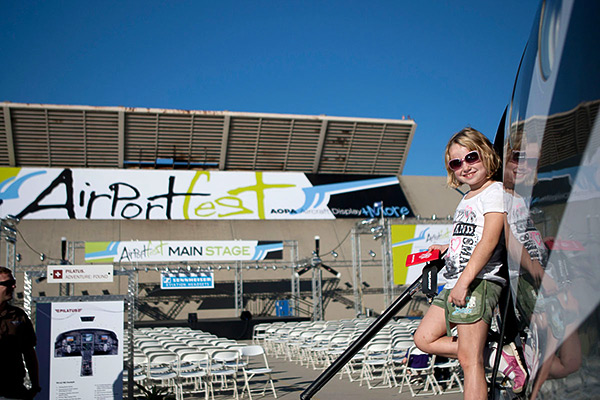 Light sport aircraft from Cessna, Flight Design, Piper, and others got a thorough going-over from many in the crowd. Bruce Kerr of Long Beach, who recently returned to flying after a 45-year hiatus, was among those considering LSAs, but he was also intrigued by the notion of building a Glasair Sportsman 2+2. The kitplane manufacturer offers a “Two Weeks to Taxi” builder program for the 2+2.

The news that the Remos has a new owner disappointed many members who had come out specifically to see the modern, comfortable LSA in the hopes that they had won it. But the chance to see next year’s sweeps offering while it is still in the refurbishment phase was an unexpected surprise. Members gathered around the Cessna 182’s engine, with cowling off to reveal the Continental IO-550 upgrade. Also completed are the Hartzell prop, Flight Aero tip tanks, and a JP Instruments EDM-930 engine data monitor.

The Cessna 182’s retro red-and-white paint scheme, still to be upgraded, reminded George Stone of Irvine, Calif., of the airplane he learned to fly in: a 1970s-vintage Cessna 172. Other members told AOPA staff that if we would hand them the key, they’d take it right now—no new paint needed. Sorry, folks, but if we did that, Editor at Large Tom Horne would be bereft, and he’s looking forward to seeing the project through to its completion. The winner of the Crossover Classic will be announced at AOPA Aviation Summit 2011 in Hartford, Conn. You can follow its refurbishment process online, and regular updates also appear in AOPA Pilot.