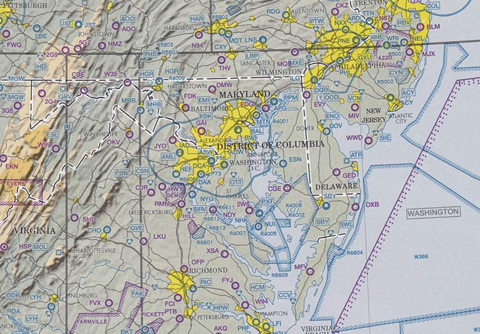 Nothing shows the big picture of a proposed flight like a VFR wall planning chart. Starting in February 2011, pilots will be able to purchase a VFR wall planning chart that was designed by the FAA’s AeroNav Products team with aviators’ suggestions in mind. The new chart will measure 59 by 36 inches and feature VFR data including airports, Class B airspace areas, special-use airspace, and topographic data. Its size, contents, and availability unfolded also make it perfect for hanging on the wall in flight schools and FBOs.

"The new VFR wall planning chart marks a milestone for the FAA in producing a charting product that was produced from a digital or database product versus the typical method of compiling the chart data,” said Visual Charting and Airport Mapping Manager David Dudish. “This allows for greater efficiency and lower cost to the agency, which in turn results in a new product that is cost efficient to the customer."

Dudish said the team worked from suggestions and ideas the team had sought from pilots. "In response to customer requests and demand, we wanted to produce a product that really took general aviation users' needs into account,” he said. “We've received input over the past year at various airshows and pilot forums, and we feel that we have a final product that will prove beneficial for the VFR pilot."

Another innovation by the FAA’s AeroNav products office has been to introduce a line of other aeronautical charts for free download from their website. The list includes VFR sectional, terminal, and world aeronautical charts; low and high-altitude en route charts; and instrument approach procedures. Charts are provided as raster graphics files. The products were previously available for purchase only.