Get the app Get the app
Already a member? Please login below for an enhanced experience. Not a member? Join today
News & Media Ninety years old and still building time 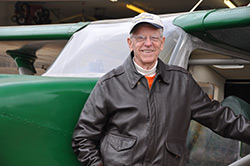 Like many pilots, Ray Costello of Corvallis, Ore., had a number of goals to meet this year.

Passing his medical exam was one—and he “aced” it.

Getting his homebuilt Murphy Rebel into the air and logging time toward the 25 hours required before he can start carrying passengers in the three-place IFR-equipped short takeoff and landing taildragger was another goal that was coming along nicely. Building the aircraft was a 10-year project.

And there was a celebration coming up soon. Costello, an Oregon Aviation Hall of Fame inductee who retired in 2001 after 16 years as AOPA’s Northwest Region representative, was preparing to observe a milestone occasion: On Nov. 27, the former Air Force pilot, an AOPA member since 1946, would turn 90 years old. A big family gathering—Costello has five children, seven grandchildren, and two great-grandchildren—was a few days away when he received birthday greetings from a former co-worker at the association and gave a brief interview.

In his service as AOPA’s regional representative for Oregon, Washington, Idaho, Montana, and Alaska, and before that as planning director for the Oregon Aeronautics Division, Costello focused on the big picture. He’s credited with facilitating the creation of Oregon’s independent aeronautics department; his GA systems work there became an FAA model. He’s known for strengthening general aviation advocacy efforts in Alaska by uniting aviation organizations there around collective goals and interests.

On his retirement in 2001, Costello was presented a special Distinguished Service Award at the annual meeting of the AOPA Board of Trustees by then-AOPA President Phil Boyer, a fellow Oregonian. Costello recalls trips to the North Country with Boyer and with John L. Baker, who was Boyer’s predecessor as well as a fellow military pilot.

Over a working lifetime in aviation there were many challenging assignments. Costello said the standouts are the projects whose goals were to unite aviation interests, work the legislative process effectively, or win legal victories that preserved GA access to special places and promised “preserving the privilege” for the future.

"One of my major interests now is in establishing aviation alliances in all of my states. This has come about from the recognition that we're all in this together," he said in a 1995 interview. "At the local and state levels, the issues are completely different than at the national level."

Now it’s time to do a little flying, said the energetic retiree. Listening to him recount the highlights of a lifetime in aviation, you’d never suspect that he’s 15 years out from four-way bypass surgery.

No wonder he adopts a mischievous tone when confiding that he aced that medical exam.