Get the app Get the app
Already a member? Please login below for an enhanced experience. Not a member? Join today
News & Media Comments sought on Luke AFB traffic rule

How well is the special air traffic rule (SATR) working in the vicinity of Luke Air Force Base in Glendale, Ariz.? AOPA has already heard from some members sharing their experiences and would like to hear from anyone who has flown through or around the SATR. Pilots should also clearly understand what procedures are required of them at Luke.

Despite common ATC practice in the SATR area, the final rule enacted by the FAA does not mandate that a pilot accept a squawk code. In fact, as long as you establish two-way radio communication with Luke, you may continue through the SATR airspace without acquiring a squawk code. If you are told to remain clear of the airspace, AOPA would like to hear of those experiences as well.

In December 2009, the FAA issued a final rule requiring only that pilots establish two-way communications before entering the Luke SATR area. The FAA turned down a request from Luke officials that would have required aircraft to be assigned a squawk code and issued a clearance before entering the airspace. 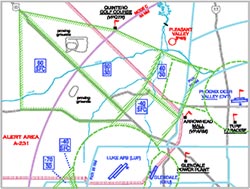 The FAA and Luke Rapcon have also been reluctant to adopt AOPA’s proposal for standardized departures from Deer Valley Airport, one of the busiest GA airports in the nation. AOPA proposed that departing aircraft be issued a transponder code on the ground to assist pilots with a seamless transition from Deer Valley through the SATR. But Luke and FAA officials have opposed that suggestion, citing budget and staffing constraints. Only a mile separates Deer Valley’s Class D airspace and the Luke SATR airspace. However, similar procedures are done throughout the National Airspace System between other facilities.

“While the sole requirement to enter the SATR is establishing two-way radio communication, the Luke Radar Approach Control (Rapcon) routinely issues squawk codes and provides VFR traffic separation to aircraft operating inside the SATR. Pilots who choose not to participate in VFR flight following services with Luke Rapcon may decline the assigned squawk code or deviate around the Luke SATR,” explained Tom Kramer, AOPA manager of air traffic service.

One helpful change is imminent: Local pilots indicated that the SATR area was not prominently displayed on the charts, so Luke and the FAA have worked to improve the charted depiction of the Luke SATR area. Pilots will note the change with the arrival of the Oct. 21 edition of the Phoenix VFR terminal area chart. SATR borders and sector boundaries will be better identified, and a side panel will outline the SATR operating requirements.

Members wishing to comment are encouraged to contact the AOPA Air Traffic Services department by e-mail. All feedback is welcomed. “We are particularly interested in any pilots that have been told to stand by or remain clear of the SATR, pilots that have been denied entry, or any enforcement actions as a result of operations in or near the Luke SATR,” said Kramer. When providing feedback, please be sure to include your tail number, date, time, and approximate altitude, which will help AOPA research the event and ensure that operations are being conducted in accordance with the rule.