Get the app Get the app
News & Media Industry, Congress seek solutions after Kings&rsquo; detention 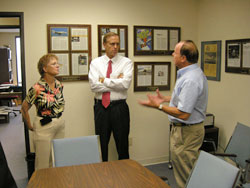 Their mistaken detention at gunpoint Aug. 28 left them rattled and shocked the general aviation community, but John and Martha King of King Schools quickly turned their attention to preventing future mishaps—and they’ve found allies in the quest.

Rep. Brian Bilbray (R-Calif.), whose district includes the Kings’ San Diego facilities, met with the couple Oct. 14 and discussed the incident, along with the value of GA to the United States. By the end of the visit, Bilbray had joined the House GA Caucus.

“We talked about the advantages of general aviation to society, all the things that we do that the rest of aviation doesn’t do and can’t do, and why he should support it,” John King explained after the visit.

The Kings’ detention at the Santa Barbara airport, which resulted from confusion over an N number of a stolen aircraft that had been reassigned to the Cessna 172S they were flying, raised serious questions about the coordination of information among law enforcement authorities and other concerns. The Kings and AOPA have been reaching out to law enforcement, federal agencies, and Congress; and Bilbray told the Kings he has a meeting scheduled with FAA administrator Randy Babbitt to discuss the issue Dec. 1. 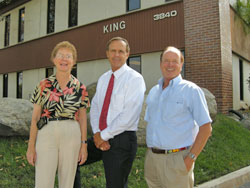 One central question in Bilbray’s examination of the incident is why the FAA re-issues registration numbers of aircraft that were previously reported stolen and are still in a database that includes stolen aircraft. As the Kings learned from calls and e-mails pouring in after their scare, they’re not alone. Other pilots reported incidents that might have been prevented if these N numbers had not been re-issued, or if recovered aircraft had been scrubbed from the stolen aircraft list. AOPA has been in frequent contact with the Kings and other pilots who have suffered from similar mixups, including one whose Cirrus was mistaken for a stolen Piper. The association is looking into several incidents to determine commonalities and how those issues can be resolved.

But the shortfalls that left two well-respected members of the GA community handcuffed in the back of police cruisers didn’t end with the FAA’s registration policy. The El Paso Intelligence Center (EPIC), which reported the suspected stolen aircraft to the Santa Barbara Police Department, acted on intelligence it could have confirmed was invalid. AOPA President Craig Fuller quickly called on the Drug Enforcement Agency (of which EPIC is part) to conduct a full investigation of the incident and prevent other pilots from being put at risk because of out-of-date information, and the association has been in contact with federal agencies about how procedures can be improved.

EPIC found the N number listed as stolen in the National Crime Information Center (NCIC) database maintained by the FBI. But the same Cessna 172 had been stopped one previous time by authorities in Wichita, who quickly cleared up the confusion—although no one updated the database. In addition, EPIC had access to the FAA aircraft registry, which could have shown that the N number had been reassigned.

In its response to AOPA, the DEA wrote that the crime database was not updated because the owner of the Cessna 150 that had been stolen in 2002 did not notify local authorities when it was deregistered. “An NCIC alert can only be modified by the law enforcement agency that entered the record. In this case, the MPD, not EPIC, was responsible for updating the NCIC record for tail number N50545,” the DEA wrote.

John King expressed concern that organizations like EPIC don’t feel responsible for the integrity of the data they access. “The problem is that no one feels that it’s their responsibility to verify the reliability of the database,” he said. And when the information reached the Santa Barbara police, their unfamiliarity with GA only escalated the problem, he said. 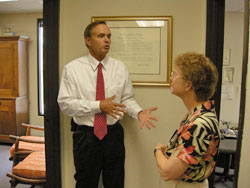 In the weeks since they were ordered out of their aircraft with their hands above their head, the Kings have worked with multiple law enforcement officials to develop better procedures to handle a suspected stolen aircraft. The Santa Barbara police responded to the possible theft as a “high-risk traffic stop,” but the nature of GA means that those procedures could do more harm than good.

For instance, the diversion of the Kings’ aircraft to remote part of the field would have tipped off a criminal, allowing the culprit simply to take off and elude the earth-bound authorities. But if the police had waited for the suspects to taxi to the FBO, tie down, and lock up, they would have immobilized themselves, John King explained. Working with law enforcement, the couple has developed a checklist for aircraft interceptions on an airport.

“The biggest thing is that we think this doesn’t necessarily have to be a risky maneuver, when you’re intercepting a pilot at an airport, that involves guns,” John King said.

King said outreach from GA to law enforcement, and relationships between law enforcement and the airport community, can help provide police with support and guidance when they deal with issues at an airport.

AOPA has also been reaching out to members of Congress to help sort out the systemic issues that may have put the Kings in the potentially dangerous situation. AOPA Vice President of Legislative Affairs Lorraine Howerton wrote to leaders in the House Transportation and Infrastructure Committee and its aviation subcommittee, along with Senate Commerce Committee counsel, to request a full congressional investigation of the facts surrounding the incident. 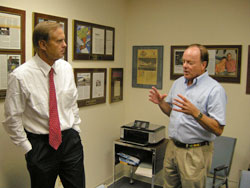 “Many questions have been unanswered and the general aviation community is quite concerned that this incident is just the tip of the iceberg,” Howerton wrote. She also contacted Reps. Darrell Issa (R-Calif.) and Peter DeFazio (D-Ore.), both AOPA members who serve on committees that could address the issue. The association is keeping members of Congress informed of developments.

For their part, the Kings expressed confidence that the GA industry and government agencies can implement improvements to help prevent this type of incident in the future. But that doesn’t mean they’re totally at ease.

“I’m still a little nervous about it,” John King said. “… It’s one of those things that haunts you. We fly the 172, we’re going to feel a little edgy when we arrive at an airport.” Still, now that the two are safe after the harrowing encounter, he’s able to look back on it with humor. “I’ve had some bad landings,” he said, “but none of them have been criminal.”