Get the app Get the app
Already a member? Please login below for an enhanced experience. Not a member? Join today
News & Media Charting a future for GA in China: Delegates visit AOPA

Charting a future for GA in China: Delegates visit AOPA 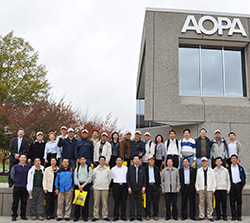 As China carries out plans to open more of its skies to general aviation, delegates from the Civil Aviation Administration of China had the chance Oct. 26 to experience GA at its most robust.

A group of 30 delegates visited AOPA headquarters in Frederick, Md., as part of a trip to research aviation in the United States. During the visit, they tried their hand at flight simulators and took flights in general aviation aircraft: AOPA’s Piper Archer and Diamond DA40, along with a Cirrus SR20 provided by Cirrus Aircraft.

“The majority of the delegates had never been up in a general aviation aircraft before,” said AOPA Vice President of Operations and International Affairs Craig Spence. “They all came back with huge smiles.” The pilot among the bunch—a Boeing 777 pilot for a Chinese airline—said the Cirrus had better avionics than he sees in the Triple Seven, Spence added.

There are 1.3 billion people in China and only 900 general aviation aircraft, so the trip to AOPA was an important part of the CAAC executive development team’s survey of American aviation.  About 85 percent of Chinese airspace is owned by the military, according to AOPA-China (http://www.iaopa.org/doc/4_2010.pdf), and the rest is mostly IFR routes for commercial jets, leaving little space in play for small private aircraft. With its eye on economic development, the Chinese government is looking to open new airspace, new airports, and new training facilities to GA.

The United States provides a model of a healthy GA infrastructure. AOPA staff briefed the officials on GA’s contributions to the American economy and role in training pilots for all aviation sectors. Growing GA in China will require infrastructure investments, education, and policy decisions, so AOPA provided advice gleaned from its 71-year history of promoting GA. The Air Safety Institute explained how education and safety are critical to maintaining an active aviation system, and AOPA government affairs staff explained policy issues that affect GA and how the U.S. government uses industry input in decision making.