Get the app Get the app
Already a member? Please login below for an enhanced experience. Not a member? Join today
News & Media GA event brings pilots, members of Congress together 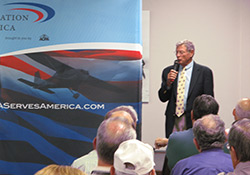 The event, designed to give pilots the opportunity to talk to their public officials about aviation topics that matter most to them, drew more than 100 AOPA members, local officials, airport personnel, and community residents. Fellow AOPA members state Sen. Harry Coates and state Rep. Danny Morgan also attended.

AOPA has supported several initiatives designed to educate lawmakers on the value of general aviation, including community events such as the one in Oklahoma, and the GA Serves America campaign, which has utilized celebrities Harrison Ford and Morgan Freeman to draw attention to the cause on Capitol Hill. 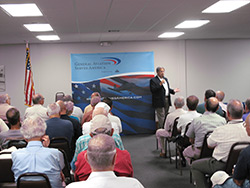 Congress also is stepping up to do its part to better understand GA. The House and Senate have formed GA Caucuses. Inhofe is one of the 25 senators on the Senate GA Caucus, and 123 representatives comprise the House GA Caucus. During the community event, Fuller presented Inhofe with a Friends of Aviation award for his support of the caucus and stance against user fees.

Another topic during the event was the search for an alternative to avgas, something that is top of mind for many pilots. Fuller reassured pilots that leaded avgas is—and will continue to be—widely available. The association is part of a coalition of aviation and petroleum industry groups that are working to reduce GA lead emissions in the short term and develop a plan for the transition to an unleaded alternative.

“We as an industry have not settled on a solution,” Fuller said. “But we will continue to investigate until we find a solution that is effective, safe, and affordable. And we will work with the agencies involved to ensure the implementation process is reasonable and appropriate.”