Get the app Get the app
AOPA Members DO more LEARN more SAVE more - Get MORE out of being a pilot - CLICK HERE
News & Media Pilots share thoughts, concerns with senator 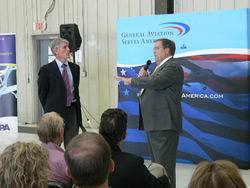 Why is general aviation important to you? An audience of 130 Denver-area pilots and aviation enthusiasts had an opportunity to share their answers with their senator Aug. 30 at a GA Serves America community event at Centennial Airport.

AOPA President Craig Fuller and special guest Sen. Mark Udall (D-Colo.) addressed a crowd of AOPA members, local officials, local aviation businesses, and community members and fielded questions about everything from getting more people involved in flying to the Large Aircraft Security Program. Udall, who has family members who fly, had the opportunity to hear from members of the GA community what is important to them.

Lawmakers on Capitol Hill have proven receptive to learning more about GA, Fuller said, and the message that GA serves America has taken hold—particularly in the growing GA caucuses. The GA community saw evidence of that in Congress’s rejection of user fees and the Obama administration’s decision early this year to forego its plan to push for them in 2011. But challenges remain, he said. He stressed the importance of writing to local and state government officials and keeping them aware of pilots’ concerns.

“All year, we’ve been talking about the importance of engagement—getting involved to support general aviation,” said Fuller. “Everyone who turned out at Denver Jet Center was doing just that. Over the course of this year, thousands of pilots nationwide have taken action by coming to events like this, making financial contributions to aviation causes, flying for charitable organizations, and doing so much more.” 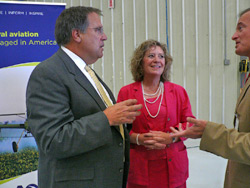 Udall thanked attendees for allowing him the opportunity to learn more about GA. He and others in government have a passion, love, and a belief in freedom, as do most of those present, he said. Flying allows pilots to experience that freedom, he added. Fuller presented Udall with a Friends of Aviation award for his opposition to user fees and support of the FAA reauthorization bill.

So what GA issues were on the minds of pilots in Denver? Audience members discussed the effects of security proposals such as the Large Aircraft Security

Program and TSA requirements for airports; ongoing efforts to transition to an unleaded avgas; AOPA’s efforts to grow the pilot population; and the recent passage of a 1,500 hour and ATP certificate requirement for airline first officers.