Get the app Get the app
AOPA will be closed July 4th, in observance of the Independence Day holiday. We will reopen at 8:30 am ET on Tuesday, July 5.
News & Media Mica, ERAU showcase NextGen in action 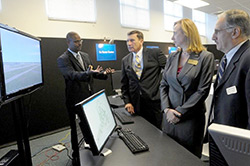 The test bed is one of three locations in the United States dedicated to evaluating NextGen concepts and technologies using computer simulations of how the technologies will work in the real world. NextGen, or the Next Generation air transportation system, encompasses the transition from ground- to satellite-based navigation and surveillance.

“At a time when our nation needs job creation, research on NextGen technologies will create significant opportunities for all of Central Florida,” Mica said. “Our partners in this research are creating jobs and economic development, while developing a system that will make air travel safer and more efficient.” Mica also announced the collaboration between Embry-Riddle and leading aerospace companies.

The FAA also has test beds at the FAA’s William J. Hughes Technical Center in Atlantic City, N.J., and a NASA facility at Dallas/Fort Worth International Airport in Texas. The Daytona Beach International site is the only one at a private facility; Embry-Riddle entered into a contract with the FAA in 2008 and expects the facility to double in size to 10,000 square feet by February 2011, according to a press release from Mica’s office.

The test beds provide a platform for evaluating components of NextGen and identifying potential risks and benefits early in planning.

“Embry-Riddle is proud to be on the forefront of revamping the nation’s air traffic control system,” said Embry-Riddle President John Johnson. “We are particularly excited about the potential partnerships with major aerospace companies and the impact it will have on Daytona Beach and all of Central Florida.”