Get the app Get the app
AOPA will be closed July 4th, in observance of the Independence Day holiday. We will reopen at 8:30 am ET on Tuesday, July 5.
News & Media Swift shares progress on potential 100LL replacement 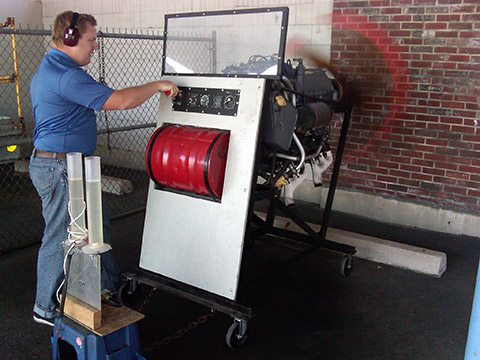 An engine demonstration at Swift Enterprises. The company shared data from testing with AOPA during the association's visit Sept. 17.

The visit continues the association's efforts to stay abreast of efforts throughout the industry, including recent visits with Teledyne Continental Motors and General Aviation Modifications Inc. (GAMI). Swift, which is working on a high-octane unleaded fuel that may be derived from biomass, discussed its progress in fuel development, testing, and certification, as well as the road ahead. AOPA also had a brief tour of Purdue University Aviation Technology facility at the Purdue University Airport.

“AOPA is committed to ensuring that the process of moving away from leaded avgas takes into account the realities and needs of general aviation. That’s why it’s vitally important that we stay in contact with all the organizations that are working on this challenge, including fuel developers as well as suppliers and aircraft and engine manufacturers,” Fuller said. “We discussed Swift's ongoing research efforts and the company's next steps."

Swift officials briefed association staff on the process used to develop the company’s fuel, 100SF, and talked about efforts to obtain specifications for an unleaded fuel from the standards body ASTM. The company also updated AOPA on its efforts to obtain a supplemental type certificate in conjunction with Embry-Riddle Aeronautical University that would allow the university to use Swift fuel in its fleet of Cessna 172s. The fuel recently powered a closed course speed record for piston engine aircraft weighing between 300 and 500 kilograms. 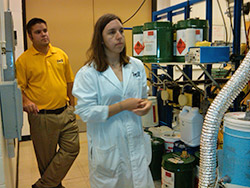 The company also shared the results of extensive testing of the fuel, including an endurance test completed at the FAA’s William J. Hughes Technical Center that provided positive results for engine detonation. As Swift moves forward with additional testing, it plans to address issues beyond just octane, including temperature considerations (such as cold starts), materials compatibility, and weight versus energy of fuel. (Swift’s fuel weighs more per gallon than 100LL, but it has a higher energy content per gallon.)

“The data that we’re seeing from Swift and other companies are important steps in the search for a solution to the issue of lead in avgas,” said Rob Hackman, AOPA vice president of regulatory affairs. “Testing like this can help us evaluate the production, distribution, performance, emissions, and economic impacts associated with each proposed alternative.”

Learn more about Swift’s fuel in “ Grass for gas.”