Get the app Get the app
Already a member? Please login below for an enhanced experience. Not a member? Join today
News & Media Chicago Class B changes reflected in Oct. 21 charting cycle

The FAA has published its final rule modifying Chicago’s Class B airspace, to go into effect at 0901 UTC on Oct. 21. The changes will be incorporated into the new terminal area charts and sectional charts that go into effect at the same time. 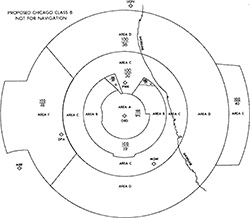 The modification mirrors the design presented during the FAA’s informal airspace meetings, held to solicit user input. Overall, the modifications are relatively minor and include additional Class B airspace areas to the east and west of Chicago, along with minor adjustments to sector boundaries around Chicago Executive Airport.

Throughout the process, AOPA has worked to make sure that general aviation airports in the Chicago area remained accessible, with GA pilots able to transit through or around the airspace.

The redesign began in December 2008 as a result of FAA guidance requiring that instrument procedures to a Class B airport be fully contained within Class B airspace. At Chicago, portions of some instrument approach procedures are not contained. Although Chicago is the second busiest airport in the United States, the Class B airspace surrounding it is among the least extensive, having an overall diameter of 25 nautical miles and a 10,000-foot ceiling.

The impact on GA should be minimal because the added Class B areas are small and at an altitude that will not affect local and transient operations.