Get the app Get the app
AOPA will be closed July 4th, in observance of the Independence Day holiday. We will reopen at 8:30 am ET on Tuesday, July 5.
News & Media &lsquo;Team aviation&rsquo; gets youngster to the doctor 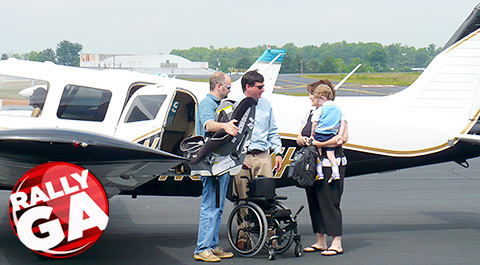 It’s a seven-hour drive from Greenville, N.C., to Greenville, S.C. Shannon and Travis Glisson were planning to make the long trip to bring their 2-year-old son, William, to the doctor. William suffered a stroke during birth, which has caused developmental complications.

They didn’t relish the idea of so much travel. “Driving with a special needs child is kind of hectic,” Shannon said.

The same trip takes two hours in Matt Kappel’s 300-horsepower Piper Lance. So on the morning of April 25, Kappel, a Greenville, S.C., attorney and volunteer pilot with Angel Flight Soars Inc., set course for the North Carolina city, where he picked up William and his parents, and flew them south.

It was 11 a.m. when Kappel taxied back in at the Greenville S.C. Downtown Airport. Ground transportation was standing by to get William into town for his noon appointment. Later that afternoon, Bo Bowman, director of the South Carolina branch of Angel Flight Soars—and a 30-year AOPA member—would fly the Glissons back home in his Piper Archer. The Greenville Jet center also offered any assistance while the Glissons were in town.

The day’s travels and show of support from the local pilot community marked the Glissons’ introduction to general aviation. The mission was also a first for the local unit of the volunteer pilot organization in delivering their patient to a waiting van from the Greenville, S.C.’s Shriners Hospital for Children, where doctors evaluated William for surgery to correct irregularities in the development of his feet—a complication associated with the stroke that he suffered at birth.

Traveling long distance in automobiles is very uncomfortable for William, said his mom, but in the two airplanes, “he did great.”

The pilots said that they were excited to team up with the Shriners Hospital on the latest mission for their organization, which in 2010 coordinated 320 flights for patients in South Carolina as part of 2,551 missions in states that also included Georgia, North Carolina, Alabama, Mississippi, and Tennessee, said Bowman.

The team effort went beyond coordinating all the complicated details of two round-trip flights using two pilots and the accompanying ground transportation. Lara Kaufman, Greenville Downtown Airport’s public relations director, took the chance to get out the word to the local news media about this new example of local GA pilots serving the community at large by donating their time and resources to help others.

For Kappel, 41, missions he flies for Angel Flight Soars hold special meaning. He’s a cancer survivor who in 1993 made a decision to focus on flight training after being diagnosed with Hodgkin’s lymphoma.

That focus helped him tough out his treatment. Now an instrument-rated pilot with about 550 hours, he flies on business trips, and three or four of the volunteer missions a year. Last March, he took his flying to another level with a family outing to New York City, flying on an IFR clearance and landing in busy Teterboro, N.J.

Kappel said he was 23 and living in the Washington, D.C., area when the idea hit him to become a pilot. He was standing in a park, watching low-flying airliners fly their arrivals to Reagan National Airport. Fascinated with what he was seeing, he fell into conversation with another airplane watcher. The man asked if Kappel was a student pilot. Driving home from the park and thinking about the challenges he faced, Kappel decided that he would learn to fly.

The closest flight school was at Washington-Dulles International Airport. Kappel enrolled and accumulated about 20 hours, building confidence with the large airport’s mix of traffic and radio communication demands.

Illness prevented him from soloing until 1994, when he was able to show that he had been treated and was in remission, and was issued a medical certificate while studying law at the University of South Carolina. He earned his private pilot certificate that year.

In 1996 cancer returned in the form of a brain tumor. Kappel defeated the new challenge, and has been cancer-free since that time.

It wasn’t until 2007 that he returned to flying, when opportunities to travel in connection with his legal work presented themselves. Kappel says that what really sealed the deal was a flight to Louisiana as a passenger in a friend’s Cessna 210. As a road trip, it would have taken 10 hours.

Kappel, from Atlanta, Ga., knew about the volunteer pilot organization because a childhood neighbor had been an early member. Now Kappel is happy to be active as a pilot and able to provide the speed and ease of GA travel to others.

“It’s terrific to be able to help them,” he said. He recalled another recent mission to fly a fireman who had been burned in an accident to Augusta, Ga., for treatment at a burn center there.

Shannon credits the Shriners Hospitals for putting her family in contact with the volunteer aviators. With family finances stretched thin and William—she calls him her miracle baby—ineligible for most financial aid, news of the flights’ availability was “a godsend,” she told AOPA.

The news from the hospital was encouraging, and William is set to see his doctors again in about six months.

It will be a matter of timing as to which pilots are available on the appointed day, Kappel said, but the crewmembers and the passengers all agree that they are looking forward to flying together again.