'Gateway to a good time'

Any aviator who wonders what backcountry airstrips are all about just needs to get some Montana pilots talking about their favorites.

“They are as close to being in the middle of nowhere in the Lower 48 as you can get,” said John McKenna, president of the Recreational Aviation Foundation.

The strips, with their charms, challenges, and—lucky for us—their champions, are just part of backcountry flying’s story. Or, as McKenna put it, they are just the “gateway to a good time.” The rugged quiet, unspoiled vastness, and opportunities to take a day hike, camp overnight, and possibly spot a world-class bighorn sheep with your binoculars, all stake a pilot’s claim to an unforgettable experience only 30 to 40 minutes flying time from populated areas.

Most pilots probably don’t know how close they came to losing it all—but let’s not go there just yet.

Just hearing the names of the backcountry strips may make the urge irresistible to go up into your attic and pull down the camping gear.

“How many people get to say that they are ‘on final to Bullwhacker’?” asked McKenna.

Bullwhacker, elevation 3,100 feet msl, is a 1,500-foot grass and dirt strip on the north side of the Missouri River in the Upper Missouri River Breaks National Monument in north-central Montana. It is one of six strips providing access to remote areas of The Breaks, as the area is known locally. 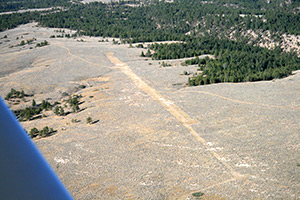 If you are charmed by images generated by your imagination of Bullwhacker, continue your tour by taking off from BW8 and hopping over to Left Coulee, Cow Creek, and Black Butte North airstrips. Or strike south across the Missouri River, land and stretch your legs at Knox Ridge or Woodhawk (the shortest of the strips, at 1,200 feet).

Do your homework before heading out for real. Weather information in the areas is spotty. Rain is more than a passing concern because this is “gumbo country,” featuring a muddy soil that can become thick and slippery when wet, and pack hard as cement inside your wheel pants when dry.

Watch out for cattle or wildlife. Animals or vehicles may have created surface ruts if the gumbo hardened after they came through. Upon landing at Black Butte North, be sure to sign in. That lets the Bureau of Land Management know that pilots are using the strip.

The Upper Missouri River Breaks National Monument came into existence by presidential proclamation on Jan. 17, 2001, and “contains a spectacular array of biological, geological, and historical objects of interest,” says the resource management plan for the area. “From Fort Benton downstream to the James Kipp Recreation Area, the Monument includes 149 miles of the Upper Missouri National Wild and Scenic River, the adjacent Breaks country, and portions of Arrow Creek, Antelope Creek, and the Judith River.” It also contains wilderness areas and portions of the Lewis and Clark National Historic Trail and the Nez Perce National Historic Trail.

The fate of the airstrips became uncertain in 2009 after environmental organizations sued the BLM, arguing that the management plan was unfairly weighted in favor of multiple-use activities instead of protecting the landscape.

The RAF and the Montana Pilots Association intervened in the case in favor of the BLM’s position. AOPA had followed the planning process closely and was an early supporter of the BLM plan, said Greg Pecoraro, AOPA vice president of airports and state advocacy.

On Aug. 9, 2011, a federal district court sided with the BLM, ruling that the management plan struck the proper balance.

“This was a very important case to the RAF and its members,” said McKenna. “In keeping with our mission of preserving public-use recreational and backcountry airstrips, we are naturally pleased with this ruling. We look forward to continued work with the BLM to keep and preserve other airstrips around the nation.” 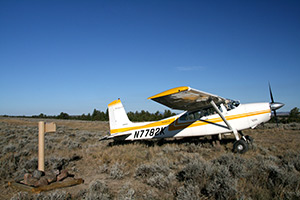 Also expressing cautious optimism about the strips’ continued availability was Chuck Jarecki, a 6,000-hour instrument-rated commercial pilot with 50 years of experience. He has owned the same Cessna 180 for 35 years. Jarecki and his wife, Penny, a private pilot, have flown from Prudhoe Bay to Panama, and from coast to coast in the Cessna. They also head into northern Canada on annual floatplane vacations.

Jarecki’s articles about the backcountry airstrips for the Montana Pilots Association newsletter, The Heading Bug, should be considered required reading for any pilot contemplating a visit. They tell you what gumbo is, how to get remote-area weather observations, and reveal a great place to watch a sunset.

For an AOPA writer seeking to interview a local backcountry flying expert, Jarecki was, if he will excuse the expression, paydirt.

“The BLM did a thorough job of exploring all the alternatives, and nobody got everything they wanted,” he said in an interview. “The strips have no detrimental effect on the environment at all.” Pilots did not even want windsocks erected at the strips because they wanted it “to be kind of a low-key use,” Jarecki said.

Pilots have flown aircraft from 65-horsepower Piper Cubs to a Bonanza into the backcountry strips (although Jarecki confided that it was a “pretty exceptional Bonanza”).

The strips are basically similar in elevation, length, and surface. At the shortest strip, Woodhawk, a challenge is the need to take off uphill, into the prevailing westerly winds.

Something else the strips and surrounding area have in common: “There is no road noise.”

Two-track roads provide ground access to the strips. Runway conditions depend on whether grazing cattle have been there; if it rained afterward, the animals’ footfalls may temporarily fossilize into rough spots. Wildlife you might see includes elk, deer, antelope, and upland game birds.

Jarecki, a director of the RAF, has worked on all of the strips, removing sagebrush from the runways and doing other maintenance. He credits cooperation between the pilot groups and BLM planners—who had to learn the basics of aviation when drafting the management plan—with the pilots’ having earned the enduring confidence of the monument’s management.

The pilot groups didn’t try to spin the officials, he said. They just explained the facts on everything from pilot certification to flying techniques.

Jarecki keeps the faith in his writing, reminding pilots to fly courteously, respect users on the ground, and practice “no-trace camping.”

Pecoraro congratulated the pilot groups for “going the distance” to preserve the resource that the backcountry strips represent. “It is a pleasure to work with them in support of recreational aviation,” he said.

“This country begs you to land and explore,” Jarecki wrote in The Heading Bug. “It can be done.”