Get the app Get the app
Get the latest news on coronavirus impacts on general aviation, including what AOPA is doing to protect GA, event cancellations, advice for pilots to protect themselves, and more. Read More
Already a member? Please login below for an enhanced experience. Not a member? Join today
News & Videos Maine tax repeal quickly reaps rewards 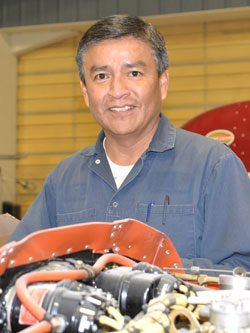 Word has gotten around that pilots flying to Maine need no longer fear the taxman, and aviation business is booming. This year’s repeal of a notorious aircraft use tax, spearheaded by Senate President Kevin Raye, that once targeted out-of-state visitors, along with adoption of full exemptions to taxes on aircraft parts and service, has begun to change lives.

“I wanted to get back to work so bad that when Jim offered to bring me up … I packed my work clothes and other things and just took off,” Bitsilly recalled.

On Dec. 20, Bitsilly, 48, was hard at work on a Cessna 340A restoration project, giving the pressurized twin turbo a new lease on life just as Horowitz gave the veteran mechanic a new lease on his aviation career.

Bitsilly is among eight professionals who recently landed new jobs at Oxford Aviation in Oxford, Maine. Horowitz currently employs 48 mechanics and artisans, with plans to hire 20 more. He is looking locally for hands experienced with building custom interiors, and across the country for qualified mechanics. The line of aircraft awaiting restoration and overhaul in the company’s 45,000-square-foot shop has doubled since the depth of the recession, with work now scheduled five months out instead of two.

Horowitz, who joined forces with AOPA in a long-running battle to repeal taxes that drove pilots, businesses, and jobs out of the state, said the tax repeal turbocharged an industry recovery now in progress.

“It takes away the disincentive to have more work done while the plane’s in Maine,” Horowitz said. With the tax law changes, Maine vaulted from being among the most hostile states to aviation to being “as competitive as anywhere else in the United States.”

AOPA Director of State Government Affairs Mark Kimberling helped make the same case to Maine lawmakers this past session as they eyed new job growth opportunities. (See “The 5-percent solution” in the November issue of AOPA Pilot.) “This was a pivotal decision for the legislature, at a pivotal time, to better position the state to attract new aviation jobs and investment to Maine as the industry begins to rebound from the recession,” Kimberling said. “While this measure is a long-term investment to grow the industry and benefit the state for years to come, it’s great to see this immediate job growth. It couldn’t come at a more important time.”

In Bangor, C&L Aerospace CEO Chris Kilgour plans a $3 million expansion to his 40,000-square-foot airline maintenance facility. Kilgour also plans to double the company’s local workforce from 40 to 80. Kilgour said that with facilities around the world, it was not difficult to avoid Maine taxes in years past, but the change in the law “certainly it makes it easier for us to rest easy.”

Kilgour said the market is heating up all over, with orders and interest increasing—particularly in the past six months.

Kimberling said AOPA will continue to advise states on sensible aviation tax policies as other states debate ways and means. For some lawmakers struggling to balance budgets, this might not seem like the time to cut taxes.

For some states, like Maine, this is exactly the time to examine tax policies of this nature,” Kimberling said. New jobs follow growth, and new employees, like Bitsilly, who has rented an apartment and is shopping for a car, bring revenue for local merchants, service providers, and government coffers.