Get the app Get the app
AOPA will be closed July 4th, in observance of the Independence Day holiday. We will reopen at 8:30 am ET on Tuesday, July 5.
News & Media &lsquo;Smiles for miles&rsquo;: Maryland event takes 185 women aloft 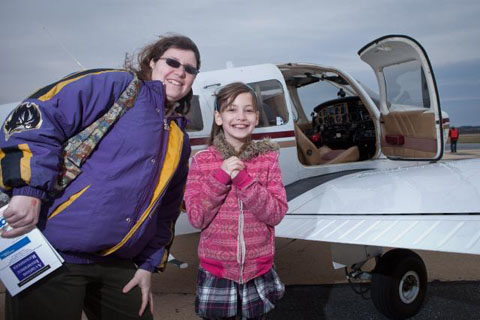 March weather can be capricious in the Mid-Atlantic, but on March 12 the seasonal gusty winds and low clouds gave way so that 185 girls and women could enjoy free flights at Frederick Municipal Airport in Frederick, Md.

The rides were the cornerstone of Women Fly It Forward, an event in celebration of Women of Aviation Worldwide Week, which was March 7 through 13. This year marks the 100th anniversary of the first U.S. certificated female pilot, Harriet Quimby.

Victoria Neuville, who organized the Frederick event, said she wanted to ensure that girls and women feel welcome when they come to the airport. Neuville is an instrument-rated private pilot. Her efforts at broadening aviation horizons for women are profiled in the upcoming April 2011 issue of AOPA Pilot. 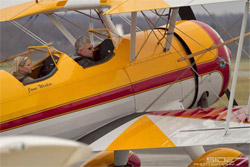 Jane Wicker, pilot and wing walker with Jane Wicker Airshows, brought her Stearman to be on static display at the event.

“I used to think that I had to get all my ratings and become a successful professional pilot before I could make a difference in aviation,” Neuville said in her blog. “I have recently learned, however, that I can make an impact regardless of my piloting title.”

Neuville said she has been bombarded with e-mails in the days following the event, including a message from one participant who described seeing “smiles for miles” as she watched women depart on and return from their flights.

Pilots flew in from different parts of the mid-Atlantic to help out in the March 12 Women Fly it Forward event in Frederick, Md. But one flew farther than most.

TJ Shembekar, an information technology executive and instrument-rated private pilot based out of Tampa Executive Airport in Florida, flew his Cirrus SR22 Turbo G3 more than 800 miles to help introduce women and girls to flying.

Shembekar, who loves to share his aviation adventures in his blog, learned about the event from organizer Victoria Neuville’s aviation blog. He had stopped at Frederick once before, as part of an effort to fly to all 50 states—he’s reached 33 so far, he said—and decided to make the trip again. He said he enjoyed the experience of introducing people to general aviation for the first time.

“A lot of them don’t know what to expect,” he said. “I was impressed with the enthusiasm, and … how inquisitive they were.” As they flew over the rolling hills of Maryland, Shembekar said, the passengers got to notice landscape features they never paid attention to on the ground and experience the freedom of flying GA.

“Hopefully I’ll contribute to them catching the bug.”

Riders were lining up before the 10:30 a.m. start time at the Frederick event. On the ramp, 20 aircraft including Cessna, Cirrus, and Piper, light sport, and a helicopter waited to take eager passengers aloft. Several pilots from AOPA volunteered to give rides, and those who were CFIs let their surprised guests sit in the left seat and fly the airplane. AOPA staff also assisted with registration and escorting riders to aircraft. Several participants alighted from aircraft and walked over to the local flight school to purchase an introductory flight certificate.

Nancy Jones and her daughter, Victoria, age 10, were among the first in line. The Joneses had come out to the airport in 2010 to watch women pilots entered in the Air Race Classic land at Frederick, which was the terminus of the race. Victoria said she was “very excited” to take her first flight, while Nancy admitted to being “a little nervous.” Still, both were beaming as they were led out onto the ramp to a waiting Cirrus SR20.

Four friends from Rockville, Md.—Lauren Clemente, Whitney Eury, Laurie Chow, and Carol Fowler—came together after learning of the event online.

Erica O’Brien of Edgewood, Md., said she has flown in a small airplane but had never flown in a Piper Archer. “I loved it,” she said.