Get the app Get the app
Already a member? Please login below for an enhanced experience. Not a member? Join today
News & Media Long-awaited 430/530 successor

In the rapidly changing avionics world, the life span for new products can sometimes be measured in weeks or months before they are supplanted by newer technology.

So the fact that Garmin’s GNS 430/530 series has been at the forefront of general aviation instrument panels for more than a dozen years is a remarkable achievement. About 120,000 of the colorful boxes have been sold, and many new capabilities added, since Garmin introduced the GPS/Comms in 1998.

So the popular and ubiquitous 430/530 was going be a tough act to follow. And Garmin worked secretively for about four years before finally unveiling a successor—the GTN 600/700 series—on March 23 at the Aircraft Electronics Association’s annual convention in Reno, Nev.

“We couldn’t just make small, evolutionary changes to a product like the GNS 430/530 and expect people to be satisfied with it,” said Gary Kelley, Garmin vice president of marketing. “We had to create something completely new that made flying easier and safer. Whatever we did, it had to be so compelling that existing 430/530 customers would want to upgrade—and that’s not easy when you’ve got a product that pilots know, like, and seems to last forever.”

The new GTN 750 and 650 retain much of the operating logic from their predecessors. But the new screens are larger and brighter with far better resolution—and the screens are meant to be touched. (The abbreviation GTN stands for Garmin Touch-screen Navigator.) The 750’s 6.9-inch screen is nearly double the size of the 530 it replaces, and the 650’s 4.9-inch screen is 53 percent larger than a 430.

Garmin gets the additional space for the 750 screen by invading the prime, center-stack real estate usually occupied by transponders and audio panels. The 750 gives owners the option of evicting both boxes in favor of remote-mounted units and allows pilots to control the audio panel and transponder functions on screen. Entering new transponder codes and hitting Ident is simple, and audio panel commands are done graphically on a screen that makes arranging who can talk to whom—and listen to ATC, music, or any combination—easy and quick. (The 650 is the same physical size as a 430 and can be linked to a remote transponder, but not an audio panel.)

The new units include Airways and WAAS capability, features that UPS Aviation Technologies pioneered, and Garmin acquired, on the long-since-discontinued GNS 480.

Veteran Garmin users accustomed to the tactile security blanket of dual concentric knobs still get one on the 600/700 series for data entry. But there’s only one because knobs and hard keys are scarce by design. In addition to the single knob, there’s a Direct-To button, a Home key, and that’s it. Just about everything that used to be done by turning knobs, moving cursors, or pressing buttons can be accomplished faster and with fewer touches using the GTN’s on-screen icons and an index finger. And instead of searching through multiple layers of “chapters” and “pages” to find the function you’re looking for, GTN menus are shallow. From the Home page, you’re seldom more than two touches away from just about anything the GPS can do.

If the GTNs catch on, the shift is likely to flood the used avionics market with 430s and 530s, and that’s welcome news for aircraft owners in search of bargains and avionics shops that perform custom work. Garmin officials say the company plans to continue selling new 430/530s until the current stockpile of parts is gone—a process they expect to take about two years. 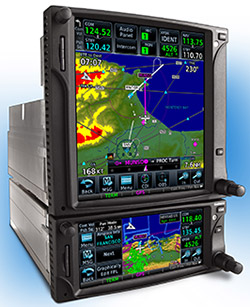 My introduction to the GTN took place in Garmin’s Mooney Ovation carrying the somewhat ironic N-number 430G. The aircraft was equipped with a 650 and 750 in the center stack and a G500 PFD/MFD in front of the left-seat pilot.

After engine start and powering up the avionics, Grant Wittenborn, a Garmin flight test engineer, let me find my way through the process of locating the ATIS frequency at New Century Aircenter in Olathe, Kan., get a taxi clearance, and enter a flight plan for a VFR trip around the local area on a brilliantly clear and cold (16 degrees Fahrenheit) winter morning.

I set the 650 to display traffic within two miles and used the larger 750 to navigate and communicate. A touch of the Airports icon brought up a list of radio frequencies at New Century Aircenter, and as a creature of habit, I immediately started pushing and twisting the dual concentric knob to enter the ATIS frequency in the Comm 1 standby window.

“Jeez, another 430 guy,” Wittenborn groaned. “Crank away on the knob if you absolutely must. But you’re really creating busywork for yourself.”

His point was well taken.

Entering a flight plan was a simple matter of going back to the home page, touching the Flight Plan icon, and adding a series of waypoints. Once again, the waypoints could be entered manually using the dual concentric knob, or by spelling out the letters on screen, or graphically on the map by simply touching a VOR, intersection, or user-defined waypoint and adding it to the list. I entered half a dozen waypoints that described a triangular path west of the airport.

After takeoff, I engaged the autopilot and tried to comply with Wittenborn’s simulated ATC commands.

When he gave me a routing shortcut, I’d find the Flight Plan icon, touch the name of the desired waypoint to highlight it, press the Direct To button, then Activate, and we were on our way. Adding a new waypoint could be done on the screen by touching the letters that popped up (in alphabetical order, not QWERTY), or using my beloved dual concentric knob.

I’m deeply suspicious of touch-screen keyboards, and my batting average for hitting the right letter or number is frustratingly low on products such as Bendix-King’s AV8OR, or Garmin’s portable aera. But the GTN provides a bigger target, bezels to steady the hand, and a “capacitive” screen that requires an electrical charge between finger and target to make a connection. I don’t know enough about what goes on behind the screen to give a technical explanation—but I can say that it performed perfectly on our hour-long demo flight. There were no inadvertent screen activations, and at no point did I touch an icon that failed to activate.

Garmin makes no guarantees about how the GTN will work when pilots wear gloves. But I wore a pair of Nomex flying gloves for a portion of the demonstration flight, and the GTN performed normally.

Entering a GPS approach to Runway 18 followed a process familiar to 430/530 users. Hit the Procedures icon, select an approach, and load or activate it. With Wittenborn still acting as ATC, I chose the Vectors option, joined the final approach course, and followed the LPV vertical guidance on the MFD to the snowy runway.

Along the way, Wittenborn called up the Charts page and the appropriate approach plate popped up on the 750 screen. Garmin offers georeferenced approach plates for its Jeppesen-based Chartview product, and they can be seen in full screen on the 750. Zooming in and panning up and down on the chart is simple and intuitive on the 750. Garmin is exploring the possibility of offering an iPad-style expansion feature, but the company isn’t making any promises in that area. Garmin officials say they’re working on georeferenced AeroNav (previously NACO)-style approach plates for the less expensive FliteCharts database, but that feature will come later.

Being able to view electronic charts and approach plates on the 750 or G500 MFD screen is a popular capability—and lots of instrument pilots absolutely love it. But those tend to be the same folks who view maps in the north-up mode, and I’m solidly in the track-up, and map-page camp when flying approaches. Perhaps because of this, I found the G500’s MFD screen, which is of great value when flying with a 430, to be almost completely redundant when paired with a 750.

It would seem far more useful for Garmin to offer a single big and wide PFD screen on the G500 instead of dividing it between PFD and MFD. Or maybe Garmin could split the G500 in half, call it the G250, and slash the price. 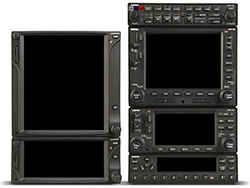 Anyone familiar with Garmin’s 430/530 line will find the GTN operating logic easy to follow.

Not everyone is going to be enamored with touch screens—and for those of us who adore buttons and knobs, the GTN wisely provides them. But touch screens, at one time the sole province of fast-food cashiers, are in GA panels to stay. Garmin’s G3000 and 5000 incorporate touch screens for high-end turbine aircraft, and those features eventually will migrate down the product line.

For 430/530 owners, upgrading to a 650/750 is more involved than simply swapping one box for another. Although the 650 has the same physical dimensions as the 430, the connection pins at the rear of the unit aren’t identical. Also, swapping a 530 for a 750 means finding space for the larger screen—and that’s likely going to mean replacing an audio panel and/or transponder with a remote unit. All this is music to the ears of avionics shops that perform the specialized work, and it’s certain that individual customers will seek a great deal of customization. (Garmin, true to form, declines to give any estimates about the number of shop hours the upgrades will require.)

In developing its GTN series, Garmin followed the course it charted in its handheld aera and high-end G3000 and G5000 systems for FAA Part 23 and 25 turbine aircraft, respectively. The company eliminated many dedicated buttons with its touch-screen portables, and it simplified flight management systems with touch-screen keypads on integrated avionics suites. The GTN series does the same thing for GPS/Comms, standardizes operations across a line of Garmin products, and provides the technology foundation for a long series of future innovations the company is planning.

Just what those innovations are going to be is impossible to know—even for the people who are developing them. Garmin officials say they’re pushing boundaries with voice recognition commands and other technology that’s new to avionics.

But Garmin hasn’t slowed down research and development during a time of unprecedented economic hardship in the GA industry. And the company that started as an aviation firm and diversified into cars, boats, and even an aborted move to cell phones, is as committed as ever to advancing the art of flying.