Get the app Get the app
Already a member? Please login below for an enhanced experience. Not a member? Join today
News & Media Pilots:

A knack for all things mechanical brought Nancy Ginesi-Hill from dreaming about flying to serving as a flight engineer for the only B–24 Liberator still flying. 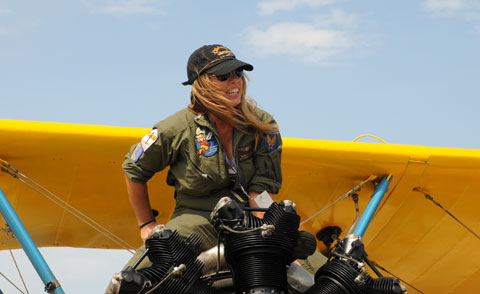 A knack for all things mechanical brought Nancy Ginesi-Hill from dreaming about flying to serving as a flight engineer for the only B–24 Liberator still flying.

A self-described tomboy who began repairing cars and motorcycles at the age of 14, Ginesi-Hill was restoring antique vehicles in Grass Valley, California, in 1988 when a newspaper story about women pilots caught her eye. She thought it would be cool to drive her 1940 motorbike to the airport, jump into an old biplane, and fly. Her first husband said she was crazy— “girls can’t fly airplanes.”

“A few months later I left and divorced him and went to the local flight school with a pocketful of money and said, ‘Teach me to fly,’” Ginesi-Hill said.

Twenty years later, Ginesi-Hill bought the airplane she’d coveted for years: a 1940 Stearman PT–17. “The big radial engine most resembled my 1940 Harley-Davidson motorcycle,” she said. “The open cockpit is like a motorbike in the sky.” The Stearman had no original logs. When she requested a history search through the Stearman Restorers Association, she found a happy coincidence: The airplane’s last assignment during World War II was at Eagle Field Air Force Base in Dos Palos, California. Ginesi-Hill had lived and worked at the airport, now known as Eagle Field (CL01), for four years helping to restore the airport. She and the Stearman still visit yearly.

Volunteering with the Collings Foundation was a natural fit for Ginesi-Hill. She would put her Stearman on display whenever the organization brought its aircraft to town, and she worked with Iris Taggart, the foundation’s ground stop coordinator. Taggart’s husband, Bob, flew B–17s during World War II.

As a B–24 crewmember, Ginesi-Hill is part of the foundation’s Wings of Freedom Tour, which takes its warbirds to 110 cities 10 months a year. She helps to set up the B–24, B–17, and P–51 Mustang; preflights the B–24 for passenger flights; and helps maintain the airplane. “For every hour of flight you figure on four hours of maintenance, so the days can be long and busy,” she said. “But the smiles on the veterans’ and passengers’ faces make it all worthwhile. It’s all about the veterans, their families, the stories, and what we pass down to our future generations.”

Ginesi-Hill fits her flight engineer schedule around her school responsibilities—she is earning an airframe and powerplant certificate—and also organizes aviation safety seminars, hosts movie nights in her hangar, and promotes aviation at local
airshows and fly-ins. She’s a fervent member of the International Organization of Women Pilots and has decorated her Stearman with nose art depicting Fifinella, the organization’s winged sprite mascot. The Ninety-Nines Southwest Section returned the salute in 2011 when it named her woman pilot of the year.