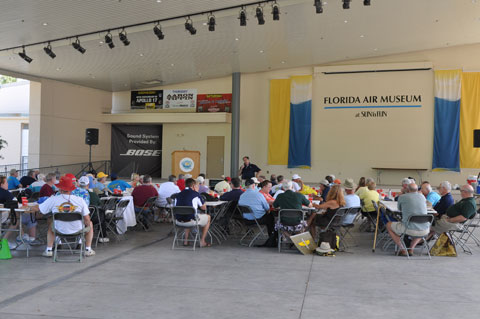 Airport Support Network volunteers and their guests learned about AOPA initiatives and new regulatory developments that can affect their home bases on March 30 during Sun ’n Fun in Lakeland, Fla.

AOPA President Craig Fuller briefed 75 attendees on the association’s just-announced Keep ‘em Flying Challenge, which encourages pilots to get out and fly this summer. AOPA staff also discussed the association’s effort to build communities at the local level through the new regional manager program and make aircraft ownership more affordable to pilots through the Aircraft Partnership Program. 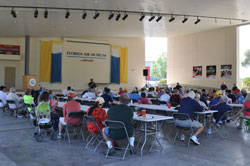 In addition, AOPA explained the FAA’s Airport System Strategic Evaluation Task in which the government is reviewing the role general aviation airports play in the National Plan of Integrated Airport Systems, and explained changes the new FAA long-term funding created for airport sponsors. The four-year FAA reauthorization bill that was signed into law changes the federal-local breakdown of funding from 95-5 to 90-10.

“Political and economic pressures will continue to haunt airports,” said Joey Colleran, director of the AOPA Airport Support Network. “It is important to be engaged at the local level, with support from AOPA headquarters, to educate the nonpilot community and elected officials about the importance of general aviation airports.”

Colleran also said that strength against these airport threats comes in numbers. Under her leadership, the Airport Support Network is poised to reach a record 2,500 volunteers. Anyone interested in becoming a volunteer at his or her airport can learn more about the program online.