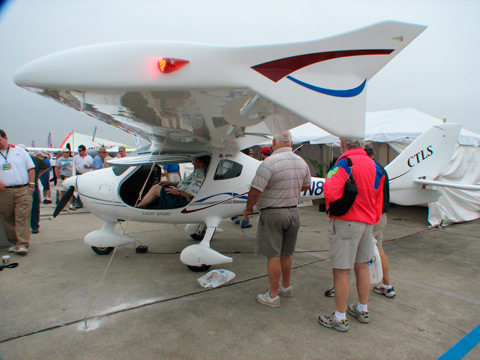 Flight Design USA officials report that 80 percent of new aircraft customers are new pilots, rather than existing pilots, a trend that, if it develops, could mean the light sport movement is attracting new pilots. Flight Design has led light sport sales in the United States since the light sport category was created, although Cessna Aircraft is catching up rapidly.

In a press release, Tom Peghiny of Flight Design USA put it this way: “In another most interesting announcement, we are pleased to state that 80 percent of our recent new aircraft customer sales were to new pilots rather than from the existing pilot community.” He called it, “…a key development pointing to a new and growing market for LSA.” Later he added this in an e-mail: “The discussion started from our South Central distributor Airtime who said that eight out of nine of their recent sales were to new pilots. I thought about it, and four out of five of my recent sales are to new pilots as well. They are typically guys 45 to 65 who are successful, and about half are early retirees or successful career-changers. Most had tried getting a license before and now were getting around to it,” Peghiny said.

The news was tempered somewhat by a quick call to another large light sport manufacturer, Tecnam. Phil Solomon, CEO of Tecnam North America, said it is certainly the trend he would like to see, but for now 70 percent of his customers are existing pilots. His customers are still the older pilots who are downsizing. Many of his customers are flight schools, and he is hopeful that students who complete sport pilot training will want to buy a Tecnam. Complicating that at the moment is the fact that flight schools are having trouble getting loans to buy trainers, he said.

Michael Coates of Pipistrel USA said he has not seen a majority of new pilots among his customers. “That’s not my experience,” Coates said. “Everyone we have sold to has [at least] a private license. Most have 30 years of experience.”

In other news from Flight Design USA, the company said orders for 15 new Flight Design CTLSi models using the newly announced fuel-injected Rotax 912 iS engine were received during the recent Sun `n Fun show in Lakeland, Fla. The model features an electric trim system and a lighter weight battery that helps to overcome the 10 to 15 pounds greater weight of the 100 horsepower 912 iS, compared to the carbureted 912 ULS of the same horsepower.