Get the app Get the app
AOPA will be closing at 3:15pm ET Thursday, December 1st. We will reopen Friday morning at 8:30am ET.
AOPA Members DO more LEARN more SAVE more - Get MORE out of being a pilot - CLICK HERE
News & Media NASA, SpaceX express cautious optimism for April 30 launch 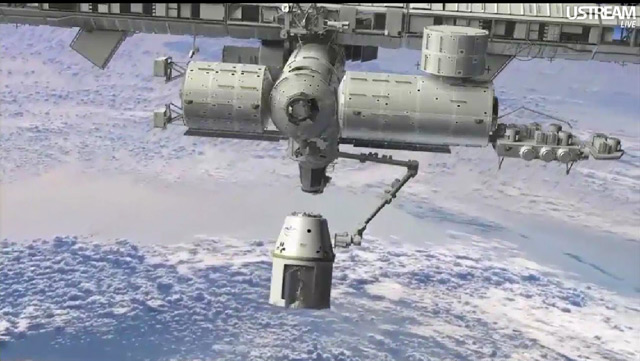 A NASA/SpaceX animation showing the Dragon spacecraft in the grip of the International Space Station’s robotic arm. Photo courtesy of NASA.

Two weeks ahead of the first planned attempt to rendezvous a commercial spacecraft with the International Space Station, all systems are go, and officials from NASA and private contractor SpaceX are keeping their fingers crossed.

Government and company officials worked to temper expectations during an April 16 briefing following a pre-mission conference on the planned April 30 launch, already delayed for additional testing.

SpaceX was awarded a contract worth up to $396 million in 2006 to design and build a launch system and orbital vehicle capable of reaching the space station. The April 30 launch will be a demonstration flight, a test, officials said, with a Falcon 9 rocket carrying a Dragon orbiter module and a 1,148-pound payload for a very careful delivery.

William Gerstenmaier, NASA associate administrator for human exploration and operations, said the reward for success will be proving a system capable of carrying a payload that no other available vehicle can match.

“We absolutely need this capability for ISS,” Gestenmaier said. “What we’re asking them to go do on this demonstration flight is amazing. This is really a tough flight.”

NASA International Space Station Program Manager Michael Suffredini said a host of precautions will be taken to insure the Dragon orbiter, an autonomous vehicle, can safely rendezvous with the orbiting station. Suffrendini said while this first payload—food, other crew consumables, and student experiments—represents an important delivery, along with the larger payload scheduled to return, both the delivery and return payloads are expendable if the system fails.

“We did do an assessment,” Suffrendini said. “We didn’t put anything on the vehicle we didn’t think we could stand to not get home.”

First launched in December 2010, the Falcon 9 rocket and Dragon orbiter system are still in the final stages of preflight testing, and the April 30 launch schedule is subject to the systems passing a series of remaining tests as expected.

NASA will take control of the orbiter as Dragon approaches close to the space station, and the mission calls for a close pass (within 2.5 kilometers) before the actual docking exercise. 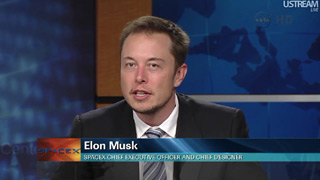 SpaceX CEO Elon Musk, also the company’s chief designer, said that while the April 30 test flight might fall short of its goal of docking with the International Space Station, it has a good shot. Photo courtesy of NASA.

SpaceX CEO and Chief Designer Elon Musk said arranging such a space rendezvous requires extreme precision, matching the trajectories of objects traveling at 17,000 mph, about twelve times the speed of a rifle bullet.

“This is pretty tricky,” Musk said, adding that success “would be really super great.”

Musk said he has raised nearly a billion dollars to support the mission, including the NASA contract and venture capital, and that the possible failure of this first attempt would be followed, in any case, by two more planned demonstration flights.

Ultimately, SpaceX hopes Dragon will be cleared to carry astronaut crews—not just cargo—and that goal will remain in the future whatever the outcome.

“I don’t think that if this mission doesn’t get all the way there that it should be taken as a verdict on commercial crew transport,” Musk said.