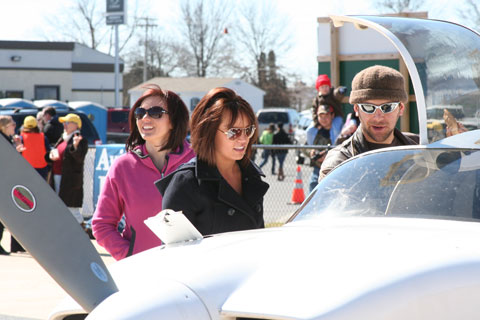 It’s official: Frederick Municipal Airport, the home base of AOPA, is the most female-friendly airport in the United States. Local pilots flew 242 women and girls out of the airport on March 10 to secure the national title.

Pilots worldwide carried 1,104 girls and women aloft during Women of Aviation Worldwide Week, March 5 to 11. A helicopter pilot at Yellowknife Airport in the Northwest Territories of Canada secured the international title for her airport. Kirsten Brazier and three colleagues flew helicopters for about six hours nonstop. They took 421 girls and women on flights on March 10, setting a new one-day record and a new one-week record, according to Women of Aviation Worldwide.

Pilots in Frederick and in Gonzales, La.; Port Lavaca, Texas; and Southern Ontario, Canada, continued a tradition begun in 2011. For 2012, new groups of pilots joined the Women of Aviation Worldwide Week in Oregon, Idaho, and Wyoming; and in Quebec and the Northwest Territories.

Two Maryland women received flight training awards this week for their participation in the Frederick Women Fly It Forward event.

Ellan Kim, Clarksburg, received a free flight lesson and a Sporty’s private pilot ground school course from the Sugarloaf Chapter of the International Organization of Women Pilots (The Ninety-Nines). A high school student, Kim plans to pursue a degree in the medical field. In her essay, she said that for the 20 minutes she was in the air, “My unforgettable experience up in the sky gave me a clear vision for what I wanted in the future.”

Toni Cimino Michelsen of Arnold, Md., received a $3,000 award to begin flight instruction, courtesy Aviation Insurance Resources. She will train at Frederick Flight Center, which contributed a 10-percent discount on flight instruction. Local pilots contributed a flight bag and a Gleim study guide. Michelsen, who will retire from teaching in June, said in her essay that the Fly It Forward event reawakened a long-held dream to learn to fly.

"This year's goal of Fly it Forward was for someone to walk away with more than just a free flight. We wanted to give someone the best chance at becoming a pilot themselves,” said Victoria Neuville, who organized the Frederick event.

“It is part of our obligation in aviation to help promote and inspire new pilots and we are delighted to provide an opportunity for a future pilot to pursue her dream,” said Aviation Insurance Resources President Jon Harden.