Get the app Get the app
AOPA Members DO more LEARN more SAVE more - Get MORE out of being a pilot - CLICK HERE
News & Media Secret mission: Doolittle Tokyo Raiders recall fateful day

No one had ever taken off in less than 500 feet in a North American B-25 Mitchell, but that’s what the Doolittle Tokyo Raiders, led by pilot Lt. Col. James H. “Jimmy” Doolittle, needed to master in order to launch an attack against Japan from the USS Hornet. 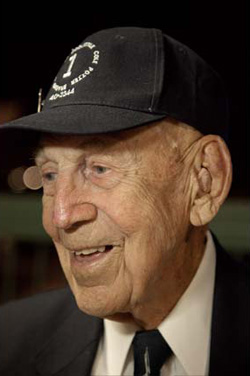 Lt. Col. Richard Cole, Doolittle’s co-pilot and one of five raiders still living, said the groups trained to take off in the roughly 498 feet they would have available on the aircraft carrier. Navy pilot Lt. Henry L. Miller was called in to help train the crew on short-field takeoff techniques; they practiced at Eglin Field in Florida in various weather and aircraft loading conditions. According to the National Museum of the U.S. Air Force, the shortest takeoff distance achieved during training was just 287 feet. Cole, now 96, said crews practiced on dry land with a 10-knot headwind and the same aircraft loading they would have on the USS Hornet. Doolittle had planned for the crews to receive 50 hours of flight training, Cole said, “but I don’t think we made more than 30 [hours]. Time was of the essence.”

Cole, along with Maj. Thomas C. Griffin, 95; Lt. Col. Edward J. Saylor, 92; Staff Sgt. David J. Thatcher, 90; and Lt. Col. Robert L. Hite, 92, were honored April 18 at the National Museum of the U.S. Air Force in Dayton, Ohio, during ceremonies marking the seventieth anniversary of the raid that boosted morale throughout the United States and rattled the Japanese who didn’t think they could be attacked on their homeland. Hite, who currently lives in Nashville, was not able to attend the events.

The raid consisted of 16 aircraft and 80 crewmembers, assisted by 10,000 Navy personnel. The Chinese risked their lives to protect the airmen who bailed out over occupied territory; in retaliation, the Japanese killed an estimated 250,000 Chinese allies and “eradicated” entire cities, Cole said, adding it was a “very sad end.” The ceremony paid tribute to all of those who supported the crew and the six raiders who died in connection with that mission, as well as those who have since passed. In addition to the surviving raiders, retired Navy Chief Petty Officer Allen Josey and retired Navy Aviation Machinist’s Mate Elmo Wojahn, who served on the USS Hornet during the mission, were in attendance. Chinese families who aided the raiders also were present.

This seventieth anniversary reunion marks the first, and perhaps last, gathering of representatives from all elements of the Doolittle Tokyo Raid in one location: the Doolittle Tokyo Raiders, USS Hornet crew, Chinese citizens who helped the raiders, and 20 B-25s. The bombers had gathered April 14 through 16 during the Grimes Gathering of B-25s, the largest since World War II, and transitioned to the National Museum of the U.S. Air Force for a static display.

Volunteer B-25 crews traveled to Ohio from as far away as Washington, California, Florida, and Texas to participate in a mass flyover opening the April 18 ceremonies. Grimes Gathering of B-25s organizer Larry Kelley led the formation in Panchito. Kelley called it the largest gathering of B-25s since World War II; 20 of the planned 22 aircraft participated in the flyover that drew large grins from the raiders as the aircraft, radial engines roaring, emerged above the treetops of the National Museum of the Air Force Memorial Garden and passed overhead. The crews made two passes, with a smaller group returning for a third, some of the raiders turning to watch them fly away one more time.

“Boy, what a show,” retired Air Force Maj. Lloyd Bryant said of the formation in opening remarks during the memorial service. Two years ago, 17 B-25s had performed a flyover for the sixty-eighth anniversary reunion.

The Doolittle Tokyo Raid was the United States’ first successful bombing of Japan’s mainland. Doolittle sought the most experienced crews and then requested volunteers for the secret mission. They all volunteered. Following short-field takeoff training, the bombers and crews boarded the USS Hornet. Two bombers were loaded by cranes in Norfolk, Va., and the remaining 14 in California, Josey recalled. The carrier’s standard aircraft were stored below while the B-25s remained on deck tied down.

It wasn’t until the USS Hornet was out to sea that the crews were briefed on the mission, Josey said. “Nobody was supposed to know in port,” he continued, later emphasizing that “everything was secret.”

A Japanese boat that spotted the USS Hornet was destroyed, but the United States didn’t know if the boat had already transmitted a warning message to Japanese military; the Doolittle Tokyo Raiders launched eight hours early and 650 miles out to sea—200 miles farther than planned.

The day of the raid, the USS Hornet’s movement through the Pacific Ocean gave the crew a 25-knot headwind, Cole said, adding that they got the “same amount from Mother Nature.” A deck officer timed the takeoffs so that the carrier would drop down into the sea and then toss the airplanes into the air, giving the raiders a boost on takeoff, he explained.

Griffin, the navigator for crew No. 9, shared that “on this particular mission, it was more or less dead reckoning,” He explained that they calculated wind drifts and followed their magnetic compass. When the bombers were south of Japan, Griffin recalls that they received a strong westerly wind that enabled some of the aircraft to make it 300 miles inland in China.

“We came in on the deck,” Doolittle recalled in an interview aired in the museum’s Doolittle Tokyo Raiders section. “We pulled up to about 1,500 feet to bomb to make sure we weren’t hit by the fragments of our bombs.”

Flying in low helped the bombers avoid detection, according to Thatcher, who sat in the top turret to keep a lookout. A group of enemy aircraft flew right over them without spotting the B-25s; they were so low, they were difficult for the enemy to spot, Thatcher explained. Once they dropped their bombs, Thatcher said the sentiment inside the aircraft was that “we had to get out of there.”

Two aircraft ditched along the Chinese shoreline, one flew north and landed in Russia, and the remaining 13 B-25 crews bailed out of their aircraft over China where the weather was “socked in to the ground,” Cole said.

“It was a hard mission, but we got away with it,” Saylor said, later adding, “We always knew it would help morale.”

“When you think about the alternative, it wasn’t difficult,” Cole said of the decision to fly the B-25s until they ran out of fuel and then bail out. “But it was scary.” Griffin shared the sentiment, saying, “Well, that’s the best thing to do when you’re in a pinch.”

Saylor, an engineer on aircraft No. 15, and the rest of the aircraft’s crew ditched off the shore of an island and evaded the Japanese thanks to support from the Chinese. “It was a hard mission, but we got away with it,” Saylor said, later adding, “We always knew it would help morale.”

The reunion brought together more than just the raiders. One Chinese woman whose family helped to protect Cole after Doolittle and the crew on aircraft No. 1 bailed out presented him with a booklet during a media session with the group.

For the first time, Mary Jane Radney, wife of the late Douglas V. Radney who served on aircraft No. 2 with the Raiders, met Hu Daxian, the wife of Li Senlin who aided Radney. The women sat arm in arm as Radney expressed her appreciation for the Chinese family’s help in protecting her love. The Chinese citizen said American pilots were considered friends and were welcomed into their home. Liao Mingfa and He Shaoying, who were children when their families aided the raiders, also traveled to the United States for the ceremony.

With his aircraft destroyed, Doolittle thought he would face a court martial, according to information published in the museum. Although the crews knew they had successfully bombed Tokyo and other cities on Japan’s mainland, they didn’t know the impact of their actions. Cole said they “had no realization of the positive effect our mission” would have on the war, emphasizing that the raiders don’t like to be singled out because they were part of a larger team serving around the world during the war. They are simply “grateful we had the opportunity to serve.”